Outside of the Star Wars franchise, his Disney roles include Lickspittle in Maleficent: Mistress of Evil Nikabrik in The Chronicles of Narnia: Prince Caspian and Willow Ulfgood in the Lucasfilm Willow.

Notable roles outside of Disney include the title character in the Leprechaun film series and Professor Filius Flitwick in the Harry Potter film series. 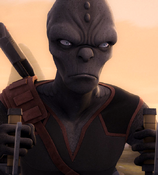 Lickspittle
(Maleficent: Mistress of Evil)
Add a photo to this gallery
Retrieved from "https://disney.fandom.com/wiki/Warwick_Davis?oldid=4561627"
Community content is available under CC-BY-SA unless otherwise noted.