Plasma cutters
Wasabi is a character from the upcoming 2014 Disney animated feature Big Hero 6. He will be voiced by Damon Wayans, Jr..

Wasabi is committed to precision. He’s super smart and just a touch neurotic, but the big and burly neatnik can’t help but join the cause when Hiro needs him most. As part of “Big Hero 6,” Wasabi amplifies his martial arts skills with jaw-dropping plasma blade weaponry. Sharp doesn’t even begin to describe this guy. [1]

This poor guy doesn't know what to do when first faced with battling evil, though he does have really cool plasma-induced lasers that come out of his arms. "When those things turn on, they can cut through anything," Hall says. The conservative dude is the most cautious about his do-gooder role. "He's this huge guy, but his whole thing is precision and rules, and by the end of the movie, he moves away from that and embraces the chaos of what being a superhero is all about." [2] 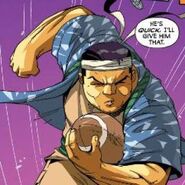 Wasabi as he appeared in the comics 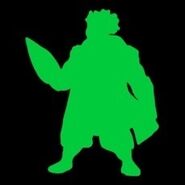 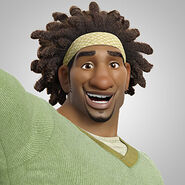 Retrieved from "https://disney.fandom.com/wiki/Wasabi?oldid=1282138"
Community content is available under CC-BY-SA unless otherwise noted.