The Wax figures are living wax sculptures that appear in the Gravity Falls episode "Headhunters". They were stowed away in the Mystery Shack by Stan Pines ten years ago, and attempted to murder Stan for leaving them in storage.

The wax figures share similar personalities and mannerisms with the historical figures they were based on despite being aware of their replica status. But they can fully cooperate with each other and share the same opinions and feelings, including enjoying time together and getting revenge on Stan for locking them away. The wax figures' curse allows them to only come alive during a waxing moon, so they are only active during the nighttime.

When Soos, Dipper, and Mabel discover the room the figures were kept in, Stan explains the history of the figures as once being the star attraction at the Mystery Shack. The group decide to reopen the wax museum again, although Wax Abraham Lincoln had melted beforehand, so Mabel decides to create a wax replica of Stan to replace it.

The next day, the family has a grand re-opening of the Wax Museum. However, due to false advertising from Stan, the conference is cut short and the crowd bitterly leaves. That night, Stan leaves Wax Stan in his chair while he went to the bathroom. Wax Sherlock Holmes then comes and beheads Wax Stan believing he was Stan, and is forced to leave with Wax Stan's head after discovering his error. During Wax Stan's funeral, the twins discover that the culprit had a hole in their footprint just like Wax Stan's shoes and the rest of the wax figures have. It is then that they realize that the wax figures murdered Wax Stan, and the wax figures behind them come to life and threaten to kill Dipper and Mabel. Wax Sherlock Holmes reveals that Stan bought them from a garage sale ten years ago for the Mystery Shack's wax attraction, but were then abandoned by Stan when sales dropped, so they wanted revenge against Stan. The wax figures then try to kill them, but the twins manage to destroy all of them and reclaim Wax Stan's head. However, Wax Larry King survives with only his head intact and roams the vents of the Mystery Shack.

During "Weirdmageddon," Wax Larry King's head is present among the survivors in the Mystery Shack. He is used as the flag topper of the rebels' flag. 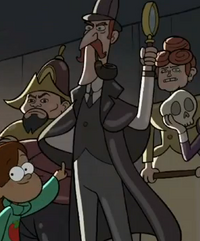 Wax Sherlock Holmes (voiced by John Oliver) is based on the fictional detective Sherlock Holmes. He appears to be the leader of the group and was the only one who carried out the assassination attempt on Stan. He fights with Dipper in a sword duel, but Dipper purposely lures him outside, melting him when exposed to the rising sun. 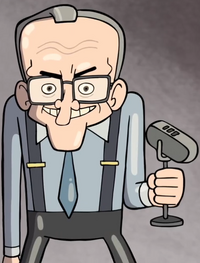 Wax Larry King (voiced by Larry King) is based on the TV host Larry King. When discovered, Grunkle Stan called Wax Larry King a "goblin man" because he didn't know who he really was. When Wax Larry King attacks the twins, his head is cut off his body and falls into a vent, where a rat bites off his ear. Later, he hops in the vent near the attic and answers Mabel's question, saying that the llama hair sweater would be better, as llamas are "nature's greatest warriors." He is also mentioned in the coded message in the credits which, when decoded, says "HE'S STILL IN THE VENTS."

Wax Coolio (voiced by Coolio) is based on the rapper Coolio. He assaults Dipper and Mabel along with the wax figures. Later, Mabel uses his head to hit the other wax figures when they are surrounding her.

Wax Groucho Marx (voiced by Michael Gough) is based on the famous comedian Groucho Marx. After attacking the twins, Wax Groucho is sliced in half by Dipper and makes a final joke before falling apart. He asks why there is nothing in his hand as he is, ironically, known for holding a cigar.

Wax Abraham Lincoln is based on the 16th President of the United States of America, Abraham Lincoln. He melted in the storage room because of exposure to sunlight from a window with open blinds. Mabel created Wax Stan out of the remains to replace it.

Wax William Shakespeare (voiced by Greg Ellis) is based on the world-famous playwright William Shakespeare. His arms are melted off by Mabel, but the arms put her in a headlock. While in the headlock, Mabel opens a door and jams it on the arms to force them off her. After the battle is over, Mabel tosses his head into a fire while he recites poetry.

Wax Genghis Khan is based on the Mongol Empire emperor Ganghis Khan. He has a sword, like the original Genghis Khan. His face melts when Dipper splashes coffee on it. Later, he gets lured into the fireplace by Dipper, and Dipper makes a joke before he lured him in.

Wax Lizzie Borden is based on the supposed axe murderer Lizzie Borden. In the fighting scene, she is seen with Wax Robin Hood running towards Mabel to kill her. When she swings her axe where Mabel is, she accidentally cuts off Wax Robin Hood's head.

Wax Richard Nixon is based on the 37th President of the United States of America, Richard Nixon. He is seen doing his V for victory sign. In the flashback scene, he stands with Wax Queen Elizabeth as they drink. During the battle, During the fight, he was kicked away by Dipper but is not seen afterward.

Wax Thomas Edison is based on the American inventor, Thomas Edison. He appears in the room when it was first discovered and before the fight scene.