3
Wayne Robson was a Canadian television, film, and stage actor, known for his distinctive high pitched raspy voice. He was best known for playing the part of Mike Hamar, an ex-convict and sometime thief, on the Canadian sitcom The Red Green Show from 1993 to 2006, as well as in the 2002 film, Duct Tape Forever.

His Disney roles included Frank in The Rescuers Down Under, Harry Dickens in One Magic Christmas, Ben Seifert in Murder She Purred: A Mrs. Murphy Mystery, and Chizzelflint the Pawnbroker in Popeye.

He died 25 days before his 65th birthday. 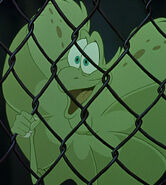 Frank
(The Rescuers Down Under)

Harry Dickens
(One Magic Christmas)
Add a photo to this gallery
Retrieved from "https://disney.fandom.com/wiki/Wayne_Robson?oldid=4515707"
Community content is available under CC-BY-SA unless otherwise noted.