Shoot webs
Web-Shooters are Spider-Man's primary tool for crime fighting. As the name implies, it can shoot webs to restrain criminals and be used as a means of travel.

The Web Fluid, the substance that these webs are made from, is made by Peter himself. The webs are able to increase their thickness to half an inch, they are fireproof, they are capable of stretching to a limited degree, and they dissolve after one hour.

In the post credits scene of Captain America: Civil War, Peter learns that Tony Stark has placed a Spider Signal on the Web-Shooters.

The Spider-Signal displaying itself through the web shooters. 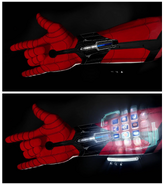