The Avengers are setting up new Headquarters and training facilities around the globe to inspire all potential recruits willing to step up and become something more. As part of this global initiative, Tony Stark has founded the Worldwide Engineering Brigade — or WEB for short— to develop advancements in super-powered technology, including new enhancements to Spider-Man’s suit as their debut project. By bringing together the world’s brightest young inventors, the WEB is creating new interfaces that will empower all of us to join the ranks of Earth’s Mightiest. [6] Besides Peter Parker, other young recruits at WEB include Harley Keener, Moon Girl, and Squirrel Girl.[7]

Guests join WEB and utilize Spider-Man’s web-shooters to fire webs at screens as the ride vehicle engages in a “swinging sensation,” akin to the superhero’s web-swinging through the New York City skyline.[8] 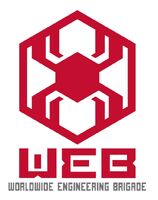 Logo for the WEB organization

Spider-Man suit concept for the attraction