Disney Wiki
Register
Don't have an account?
Sign In
Advertisement
in: Article of the week, Characters, DuckTales characters,
and 33 more
English

Animals, her dolls and toys, tea parties, people being nice, going on adventures and spending time with her Uncle Scrooge, helping out

Being neglected, cruelty, the idea of marrying Doofus, the nephews being mean

Growth ("Attack of the Fifty-Foot Webby")

May and June (clones/sisters; reboot)

Twitchy (ant)
The rest of the ant farm
Webby Vanderquack is a major character in the DuckTales series.

Webby is the granddaughter of Bentina Beakley. It is unknown what happened to Webby's own parents, but Mrs. Beakley seems to be her legal guardian. At the time of Mrs. Beakley's interview for the position of Scrooge's maid, cook, and the nephews' nanny, Webby, and Bentina were homeless. She agreed to work only for food and shelter for the both of them--a deal Scrooge couldn't refuse. Since then, both have been adopted into the Duck's extended family, and Webby earned a place in Scrooge's heart, evident by him telling her to call him "Uncle Scrooge" even though they're not related.

Webby is an extremely affectionate, adorable, and emotional little duckling and has a great love for animals. She's never without her "Quacky-Patch" doll--a small stitched doll that looks exactly like her and sometimes keeps small tokens like jellybeans and marbles inside a hole in its stitching. Webby's love for animals is her greatest asset since she seems to be able to tame even the most exotic creatures including dinosaurs and a Snow Monster. Her only conflict with animals came when she got lost in the Outback--her doll was stolen by a koala and she was chased by warthogs, though she eventually overcame her fear and became friends with those animals as well.

Webby is very expressive and always speaks her mind. An example of this is that in a possible future, depicted in the episode "Duck to the Future", Webby is the only one of Scrooge's family to help him return to his own time. She has grown up into a lady and is married to Doofus Drake. When Scrooge returns to his own time, he suggests that he will see them at their wedding, to which Webby displays great disgust.

The Disney studio promotional material said that her greatest goal is to become the fourth "Nephew". Webby often feels neglected and this has often been the impetus for her own misadventures. One even caused her to join the Beagle Babes after being kidnapped by them. Despite incidents like the prior, Webby is also often the voice of reason and is shown to be much more sensible about certain things than the boys. One example of this is in the episode "Merit-Time Adventure", where the children are trying to earn their sailing merit patches, but she is the only one who studies for it while the boys goof-off. In the end, her studying pays off and she not only gets her patch, but she saves the day as well.

Webby makes her first appearance in the DuckTales episode "Three Ducks of the Condor" (part three of the pilot movie "Treasure of the Golden Suns"). After which she made regular appearances throughout the series. Some episodes even focused on her, such as "Attack of the Fifty-Foot Webby" and "The Good Muddahs".

In "Attack of the Fifty-Foot Webby", when Scrooge takes the children to the jungle to find a rare animal, Webby comes in contact with some water that causes her to grow to a massive size.

In "The Good Muddahs", Webby is kidnapped and held for ransom by the Beagle Boys' cousins, the Beagle Babes. During the time that they're holding her, she befriends them.

In the DuckTales movie, Scrooge takes Webby, the boys, and Launchpad on a trip to find the Treasure of Collie Baba, unaware that the evil Merlock is also looking for it. When they find it, she spots an oil lamp and asks Scrooge if she can have it, because it looks like a teapot. Not being very valuable, he says 'yes'. After having the treasure stolen by Merlock and barely escaping, they return to Duckburg empty-handed.

Once home, Webby begins to polish her "teapot". As soon as she wipes it with a cloth, a Genie pops out. He befriends Webby, Huey, Dewey, and Louie and grants several wishes for them. Her first wish, for a baby elephant, almost reveals the Genie's presence. Finally, Webby's wish that her toys would come to life reveals his presence to Scrooge. Once Gene the Genie is revealed, Scrooge wishes for the Treasure of Collie Baba and takes the lamp to the Archaeological Society Ball, where he plans to tell of his discovery. Here, Dijon (Merlock's sidekick) gets a hold of the lamp and wishes for Scrooge's fortune. After he's arrested for trespassing on "his" own property, Webby and the rest of Scrooge's friends chip in to bail him out of jail. After which she assists in retrieving the lamp and saving the day.

Webby appears in the opening theme of Raw Toonage but does not appear in any of the episodes. 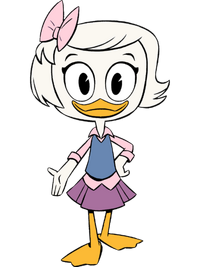 Webby reappears in the reboot series as a major character. This incarnation of Webby is considerably older than the original, and is portrayed as an enthusiastic adventure fan and Clan McDuck historian who idolizes Scrooge McDuck and regards Donald Duck as "one of the most daring adventurers of all time".[1]

However, she is also extremely socially awkward. Having lived a sheltered life in McDuck Manor, Webby is new to the prospect of friends and the world outside. The nephews become her first real friends and later become who she considers family, while she helps them fill the holes in the McDucks' mysterious history; the first season's major story arc involves her helping Dewey uncover what happened to the nephews' mother Della Duck. The reboot version of Webby is notably more extreme and competent since her protective ex-spy grandmother Beakley has taught her several unique skills, including foreign language and martial arts. Webby can be seen carrying her notable grappling hook, her adventure journal, and night-vision goggles. She is known as "The Fists" of the group.

She refers to Scrooge as "Mr. McDuck" until "From the Confidential Casefiles of Agent 22!", when Scrooge asks her to call him "Uncle Scrooge".

In "The Last Adventure!", Webby is revealed to actually be Scrooge's daughter via cloning and her original F.O.W.L. given name is April. The episode does not imply that Webby will start using the name of April.

Webby's original design appears in "The Other Bin of Scrooge McDuck!", when she is transformed into a doll of it during Lena's nightmare sequence. This doll can also been seen throughout the reboot pinned on Webby's bedroom wall.

Webby can be seen during the opening credits of Black Widow, as footage from the original DuckTales' opening appears in a series of screens.

In DuckTales and its sequels DuckTales 2 and DuckTales Remastered, Webby is a non-playable character who appears at certain levels to drop hints to the player about winning. In the remastered version, her role was expanded.

DuckTales: The Quest for Gold

In DuckTales: The Quest for Gold, Webby is a playable character who is featured in the Wildlife Reservation level where the player must get photos of rare animals.

Webby appears as a Medal in Kingdom Hearts Union χ, sporting her design from the DuckTales reboot.

Webby appeared regularly in the DuckTales comic book stories. She also appeared in the Darkwing Duck crossover arc Dangerous Currency, during which she showed a slight crush on Honker Muddlefoot.

Despite this, she does appear on the exterior of the Hong Kong Disneyland bus with Mickey and his friends and will host the water balloon game alongside Huey, Dewey, and Louie in the upcoming PLAY! Pavilion at Epcot. In the same park, she and her fellow DuckTales stars will host the DuckTales World Showcase Adventure. As well, she makes picture cameos in Minnie's Style Studio (in the model sheet for Cute Vanderquack), Camp Woodchuck Kitchen, and Villa Donaldo.

The Disney Wiki has a collection of images and media related to Webby Vanderquack.