Disney Wiki
Register
Don't have an account?
Sign In
Advertisement
in: Characters, Robots, Characters who fly,
and 11 more

Weebo is the tritagonist in Disney's Flubber. She is a hovering sentient robot who was created by Philip Brainard to act as his assistant until her demise.

As a floating robot in yellow, black, and gray colors, Weebo has eyes that have a different shape and possess light. When she expresses, she shows segments of many actions and feelings on her LCD screen when it opens. For example, she shows the segment that has Doc from Snow White and the Seven Dwarfs sleeping in a sink. She has the ability of flash photography like when she once takes a picture of Flubber. She also can make a holographic projection in the form of a human spirit named Sylvia (with a white dress on it).

Weebo first appears when Brainard announces his new plot to create an energy compound that will raise enough money to save Medfield College from being closed down by Chester Hoenicker. Despite being amazed to see that Brainard has created a successful energy source known as Flubber, Weebo prevents him from marrying his fiancée, Sara, due to the fact that she herself is in love with him, which puts his and Sara's relationship at risk.

Eventually, following Brainard's failed attempt to win back Sara after the successful game between the Medfield Squirrels and Rutland Rangers, Weebo witnesses him dumping his emotional baggage, eventually learning of her true intentions that she's in love with him. Deciding that she's the one for him, he decides to move on without Sara, but this made her feel so guilty of ruining his relationship in the first place. To that end, she heads over to Sara's house and played his ramblings to her, which convinces her to reconcile with him.

Weebo then tags along with Brainard and Sara's plan to use the Flubber into forming a deal with the Ford Motor Company to create an airline of flying cars to pay off the loan. Needless to say, Hoenicker learns about the Flubber and sends his thugs, Smith and Wesson, to break into Brainard's house and steal it, intending to use it to transform the energy industry for profit. Despite Weebo's attempts to protect it, she is destroyed when Wesson smacks her with a baseball bat. Upon seeing her dead, Brainard and Sara mourn for her, until Brainard remembers the last thing that appeared on her screen before she died, which was the word "STORK" and enters the code into the computer. They see Weebo in her Sylvia form giving her final message. She confesses her love to Brainard and says that she made blueprints for her daughter, Weebette, entrusting Brainard to do the job for her in case she's destroyed.

Brainard and Sara later avenge Weebo's death by rescuing the Flubber and defeating Hoenicker, Smith, and Wesson before sending them to prison. Brainard then uses Weebo's blueprints to create Weebette to carry on her legacy.

Weebo giving Dr. Brainard her final message and blueprints for her daughter, Weebette 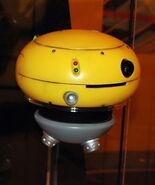 Weebo displayed in the Journey Into Imagination With Figment entrance and queue in Epcot at Walt Disney World.