"Ain't 'ya gonna help me out over there, Henry? Goodness, gracious! What do you think we have you on the show for?"
Wendell is a diminutively-sized bear with a massive overbite who performs in the Country Bear Jamboree attractions at the Disney theme parks.

He is occasionally paired with the show's master of ceremonies Henry, forming a comedy duo with him.

He also appears in the parks as a walk-around character along with fellow Country Bears Big Al, Shaker, and Liver Lips.

Wendell and his songs with Henry were taken from a musical comedy duo called "Homer and Jethro", with Wendell being inspired by Jethro.  Much of his banter with Henry was taken directly from the songs the Imagineers chose to use, with Henry having gained the name to better preserve those lines. In Marc Davis' original concept art, Wendell played a banjolele instead of the mandolin.

Wendell is a frustrated basketball player. He quit the game when in the team photograph, he discovered he came up to the other players’ knees. He then turned to baseball, but three people stepped on him (they thought he was second base). He went from baseball to football, until two quarterbacks threw him for touchdowns. It was after his gridiron career that he latched onto Henry. When Wendell and Henry get together—well, nobody dares mistake Wendell for anything but what he is: a small, singing bear. 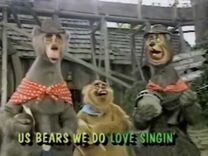 Wendell with Liver Lips and Shaker in Disneyland Fun. 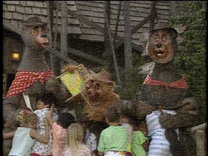 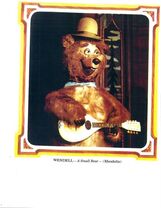 Wendell with Big Al and Shaker in Campout at Walt Disney World. 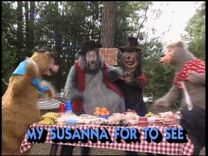 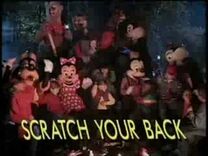 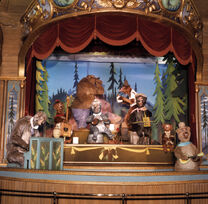 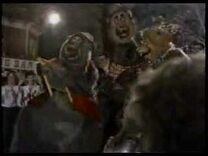 Add a photo to this gallery
Retrieved from "https://disney.fandom.com/wiki/Wendell?oldid=4026560"
Community content is available under CC-BY-SA unless otherwise noted.