Wendi Anne McLendon-Covey is an American actress, voice actress, comedian, writer, and producer known for playing Deputy Clementine Johnson in Reno 911!, and Beverly Goldberg on the ABC sitcom The Goldbergs, since 2013 and its spin-off Schooled.

For Disney, she played Dr. Ice in the Wizards of Waverly Place episode "Three Monsters", and Ms. Stout in The Search for Santa Paws. She also played Connie in the ABC Family TV show, Greek, Vivian in the ABC Family TV show, 10 Things I Hate About You, and Vice Principal in the ABC TV show, Cougar Town. In addition, she has lent her voice to Didi 05 in the currently unreleased Cars Toons episode To Protect and Serve. She even voiced Peanut's mom in Pickle and Peanut and Nancy Green in Big City Greens. She also voices Mrs. Claus in Puppy Dog Pals and Monica Rappaccini in M.O.D.O.K. 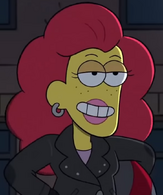 Wendi McLendon-Covey attending the 2019 Sundance Film Fest.
Add a photo to this gallery

Retrieved from "https://disney.fandom.com/wiki/Wendi_McLendon-Covey?oldid=4227611"
Community content is available under CC-BY-SA unless otherwise noted.