1993–present
Wendy Raquel Robinson is an American actress and voice actress. She is probably best known for her roles as high school principal Regina "Piggy" Grier in The Steve Harvey Show and Theresa Mack in The Game.

For Disney, she voiced Leslie Parker in The Proud Family episode; "Behind the Family Lines", Katanga in "Hooray for Iesha", and played the role of Cruella De Vil in Disney's 2015 live-action movie Descendants. She also played Krystal in the ABC TV show, The Mayor. She even played Dreamweaver Kema in Raven's Home and Mrs. P in the ABC TV show, Grand Hotel.

Cruella De Vil
(Descendants)
Add a photo to this gallery 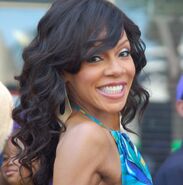 Wendy Raquel Robinson in May 2013.
Add a photo to this gallery
Retrieved from "https://disney.fandom.com/wiki/Wendy_Raquel_Robinson?oldid=4161717"
Community content is available under CC-BY-SA unless otherwise noted.