The Western River Expedition (WRE) is the name of a Disney attraction that was designed, but never built. It was to be a western themed boat ride, slated to appear in the northwestern section of Frontierland at the Magic Kingdom, a theme park at the Walt Disney World in Lake Buena Vista, Florida, USA.

This Disney attraction is not to be confused with a similarly named river rafting outfitter with a plural spelling (Western River Expeditions, WRE). Both the Disney attraction and the rafting company were conceived at roughly the same time (early 1960s) and it is unknown if either knew of the other's existence until recent web searches began producing results for both.

When Walt Disney World opened in 1971, it featured many popular Disneyland rides, but not Pirates of the Caribbean. The Western River Expedition was to have been Walt Disney World's answer to this ride. When plans were being made for the Magic Kingdom, Imagineers had no plans to replicate Pirates of the Caribbean for the Magic Kingdom. At the time, it was believed by many Imagineers that Florida residents were too accustomed to pirates, as pirates are part of Florida's local legends and lore. Disney management thought that cowboys and Indians would be more surprising and exciting to Florida residents. However, this led to many inquiries of "Where are the pirates?" and complaints being filed during the early days of the resort's operation.

The attraction began life as a proposal of a historical recreation of the Western Expansion of the United States, that would have been built on the banks of the Mississippi River in St. Louis, near the Jefferson National Memorial. Animator-Imagineer Marc Davis designed the attraction and characters in the form of drawings and models over a five-years period. Disney executives such as Richard Irvine and Roy Disney both liked the idea when presented with Davis' concepts. The attraction was to have been located inside, outside and around an architectural feature in Frontierland known as Thunder Mesa Mountain.

Guests would have entered through an old mineshaft to an indoor loading area, in a twilight atmosphere (similar to the night atmosphere in Pirates of the Caribbean). After boarding a wooden launch, riders would have traveled through a series of caves with stalactites and stalagmites taking the forms of animals and people. The ride's narrator, was an audio-animatronic owl named Hoot Gibson (a pun popular rodeo-star and western film actor Edmund Richard "Hoot" Gibson (1892-1962)) would explain the ride's safety instructions. Then, guests would have passed by peaceful scenes in the wilderness, featuring buffaloes and prairie dogs and a camp of cowboys singing the attraction's theme song with a chorus of cacti. They would then encounter banditos robbing a stagecoach, warning them they would meet again downriver.

Many following scenes would then take place in a fictional town known as Dry Gulch, where guests would have witnessed a musical show (a bank robbery, prisoners escaping the Sheriff's cells via an underground tunnel, a saloon with a cowboy on horseback on its roof, plus ten other characters including a bartender trying to shoot the intruder off the roof, three saloon girls, and other cowboys hooting and hollering.

Then, back into the wilderness, guests would have discovered Indian abode houses, and even witnessed a rain dance that causes it to "flood the mesa". The boats would start to climb a lifthill, coming through a forest fire started by the storm. The banditos reappeared threatening to rob the guests, only for the boats to drop down back into the loading caves.

If built, it would have been one of the most complex and expensive Disney attractions of its time, housed in one of the largest show buildings (a large warehouse that stores the interior of the attraction) ever created by the Disney company. Its projected expense is one reason it was never built. The attraction would have also shared the show building with a "runaway" mine train themed roller coaster. Other features of the pavilion-style WRE would have included hiking trails atop the mesa, an outdoor logride through the mesa wilderness, a Pueblo Indian village, a nature diorama for the Walt Disney World Railroad to pass through, and a pack mule attraction.

Where are the pirates?

When the Magic Kingdom opened, the most common complaint from guests were that there were no pirates. Disney hastily built a second Pirates of the Caribbean ride in the Magic Kingdom, thus scrapping plans for the Western River Expedition because much of the budget planned to build it was used in building Pirates of the Caribbean for the Magic Kingdom. The economic downturn of the early 1970s and changes in Disney management also contributed to keeping the project from going through, along with concerns over the stereotypes of Indians and the loss of popularity of Westerns. Years later, there was the possibility that the Western River Expedition would be built. Unfortunately, such chances were very slim, due to several factors, which besides changes in management and an economic downturn, included:

When ground broke on Big Thunder Mountain Railroad in January 1979, Marc Davis, desperate to save his Western River Expedition, offered a compromise: the roller coaster could be built as long as a scaled down WRE was built opposite the railroad tracks. There would be no trails on top of this scaled down version. The only thing WRE would have was the boat ride. Unfortunately, this was not the way things turned out. The proposed compromise was never enacted on and construction of Big Thunder Mountain Railroad continued. 1978 proposals to bring the attraction to Disneyland in a Tall Tales inspired area called "Land of Legends" would also fall through due to the cancellation of adjoining project Discovery Bay in the wake of the cost overruns on Epcot. Frontierland would not receive a water-based attraction until 1992, when Splash Mountain, a log flume themed to the film Song of the South, opened.

Legacy of the Western River Expedition

The original plans for WRE included a raft which would take guests to WRE, according to artist renderings. Guests also take the raft to gain access to Tom Sawyer's Island in Florida.

Big Thunder Mountain Railroad opened in November 8, 1980, on the plot of land originally to be occupied by the Western River Expedition, primarily so guests wouldn't put off their next visit to WDW until after Epcot Center opened. The original concepts for the ride incorporated it into the WRE pavilion, and also featured a backwards segment.

Both the World of Motion and Living with the Land would borrow scenes from the concept such as the stagecoach breakdown and train robbery in Motion and the Bison and Prairie Dogs in The Land.

Although themed to Song of the South, Splash Mountain is derived from the unused log ride portion of Thunder Mesa. Disneyland's Splash Mountain also featured an audio-animatronic owl known as Professor Barnaby Owl which appeared overhead of guests while informing them of attraction features, in the same vain as WRE's Hoot Gibson.

When Disneyland Paris opened in 1992, Frontierland's fictional town was named Thunder Mesa, as a tribute to the WRE. This version of Frontierland was strongly influenced by WRE compared to any previous version.

The Phantom Canyon scene of Phantom Manor at Disneyland Park (Paris) is derived from the planned scene showing the town of Dry Gulch in WRE. There are even some WRE elements in Phantom Canyon, like the bank robbery, the showgirl and the bartender.

Although one might consider it to have no relations with WRE, Expedition Everest at Disney's Animal Kingdom does take one element from WRE : the backwards segment of the ride. The planned roller coaster in WRE was to have a backwards segment as well.

Western River Expedition is something of a legend among Disney Imagineers, especially to those who admire the work of Disney legend Marc Davis. Every time Imagineers pitch the ride idea to Disney executives, it is vetoed. Imagineers have instead slipped parts of the ride into other attractions: Splash Mountain, World of Motion, Phantom Manor, and Living with the Land. Davis' concept drawings and model for the Western River Expedition have been filed away in the Imagineering Research Library. 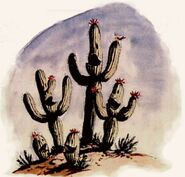 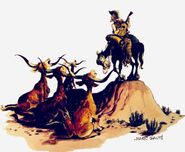 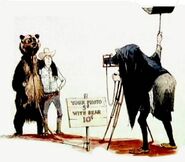 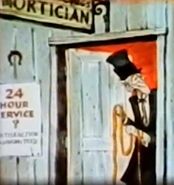 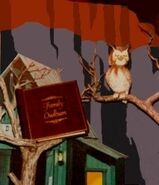