What Are You, Five?

Hildy casts a spell that turns the 7D into five-year-olds. 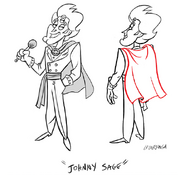