What If... Captain Carter Were The First Avenger?

August 11, 2021
"What If... Captain Carter Were the First Avenger?" is the series premiere, of Marvel's Disney+ series What If...?. It premiered on August 11, 2021. It was written by showrunner A.C Bradley and directed by Bryan Andrews. This episode is based on Captain America: The First Avenger.

“Earth, June 1943. The Nazi army marches across Europe leaving death and destruction. The allied armies band together to create a new kind of solider, a super soldier. At humanity's darkest hour, a skinny kid from Brooklyn became Captain America. After turning the tide of World War II, he made the ultimate sacrifice, restoring peace and saving this universe. But in another universe, a single choice created a whole new hero... There! That's the moment that created a new universe. When asked to leave the room, Margaret "Peggy" Carter chose to stay, but soon it would be her adventuring into the unknown and creating a new world.”
―The Watcher

During WWII, the Allies have Dr. Abraham Erskine create a super soldier serum and have Steve Rogers be its very first test subject. At the moment Peggy Carter is asked to wait in the booth, she instead chooses to stand nearby. This results in Heinz Kruger placing the bomb closer and activating it before Steve even has the chance to get the serum. During the chaos, Steve tries to stop Kruger, but is injured. Peggy takes him out and with no other option jumps into the machine and gets the super soldier serum. Despite it being a success, her superior, Colonel Flynn, refuses to put her in the field due to her being a woman.

Feeling defeated, Howard Stark offers to help Peggy out by giver her a costume and shield that he made for her. Taking the name Captain Carter, Peggy quickly takes out a group of Hydra soldiers and captures Arnim Zola and retrieves the Tesseract. Howard uses it to create a giant suit of armor for Steve called the Hydra Stomper and together liberate their fellow soldiers. Together, Peggy and Steve take out Hydra forces while also forming a close romantic bond. However, while trying to impede a train carrying Hydra weapons, it turns out to be a trap and Steve seemingly dies during the mission.

Peggy interrogates Zola and she and her allies locate the Hydra base and storm it with Peggy and Howard going to Red Skull directly while Bucky, Dum Dum Dugan and the others search for the power source. They find that not only is the Hydra Stomper still intact, but that Steve is alive and liberate him to help Peggy. Peggy and Howard come upon Red Skull using the Tesseract to unleash a giant tentacle monster that kills him immediately. Peggy and Steve work together to defeat it, but the latter is forced to push it back through the portal before Howard shuts it off; leaving Steve devastated, though the Tesseract is secured.

In the present day, Nick Fury activates the Tesseract and brings Peggy back to Earth. She is shocked to learn that it has been seventy years since WWII. While the war is over, she can no longer be with Steve.

“Her one choice gave birth to a whole new history and gave the Multiverse a new hero. As for me, these are my stories. I observe all that transpires here, but I do not, cannot, will not interfere. For I am... THE WATCHER!”
―The Watcher 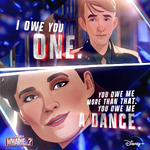 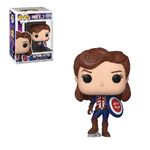 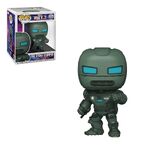 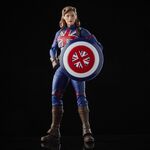 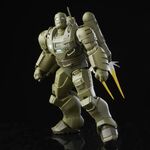