Once Upon a Time (as Widow Lucas)

Amos and his dogs chasing Tod, birds flying off with her bloomers from her clothesline, Tod's serious troubles, Amos' grumps

Tod (fox; formerly), Abigail (cow), her chickens
Widow Tweed is a major character in Disney's 1981 animated feature film, The Fox and the Hound. She is the caretaker of Tod.

Widow Tweed is known for her kindness; she mentions suffering from loneliness after the loss of her husband. She is motherly, taking in the orphaned Tod and raising him. However, she also shows a firm, assertive side and repeatedly stands up to the antagonistic Amos Slade.

When a fox cub's mother is shot and killed by a hunter, Big Mama the owl and her friends, Dinky the sparrow and Boomer the woodpecker, search for someone to look after the orphaned cub. They realize that Widow Tweed, a nearby widowed farmer who is known as a kind woman, would be the perfect person for the job. Boomer knocks on her door and when she sees Big Mama and Dinky picking her bloomers off her clothesline and drop them on the cub, she runs over and finds the young fox underneath. When she realizes he has no mother, she takes him in as her own. She names him Tod because he looks like such a little toddler. She tells him that with him there now, she's not going to be so lonesome anymore after the passing of her husband.

Widow Tweed cares for Tod, and he follows her everywhere. She notes that she cannot stay mad at him, even when he is being mischievous. After he begins annoying Abigail the Cow, she encourages him to run along and play. Unknown to her, he meets a hound puppy named Copper and they become friends. One day, her neighbor, Amos Slade chases Tod, trying to shoot him for harassing his chickens; during the chase, he accidentally nearly shoots Widow Tweed, destroying the pails of milk in the back of her car. Tweed stops her car and confronts Amos and Chief (who also chased Tod), making him stop his car in front of her. She grabs Amos' rifle and shoots out the radiator in his truck. She tells him that Tod would never hurt anyone or anything and warns Amos that his temper is going to get him in trouble someday, then orders him off her property. Deciding to keep Tod safe, she decides to coop him up inside, but she is glad the next day to see Amos and his two dogs, Chief and Copper, leave for a long hunting trip for the winter.

During the winter, Tweed gives Tod a birthday party, celebrating his first birthday, and presents him with a collar. However, trouble starts up as Amos comes back to shoot him. He had gone onto Amos' property again, and a long chase had resulted in Chief nearly getting killed. Although Tweed prevents Amos from barging onto her property and locks up her door, Amos warns Tweed that she can't protect Tod forever, which she knows is true. The next day, she makes the hard decision to release Tod into a nearby game preserve (which is also a forest) where he'll be safe and where he belongs. She gives her beloved fox friend a big farewell hug, then sadly drives away.

Later, after the rescue of Amos and Copper from a bear by Tod, Tweed doctors Amos' leg, which he had injured in one of his own bear traps earlier.

The Fox and the Hound 2

Widow Tweed only briefly appeared in and out of a few scenes in the second movie. Tweed is milking her cow, Abigail, in her barn until she notices Tod being chased by Chief and Amos again while Copper only follows them. The chase leads to cost a bucket of milk, which later lands on Amos' head, and Abigail, with Amos on her back, running down the field like crazy in a rodeo, much to Tweed's dismay. After Amos lands in Tweed's pigsty, she reprimands him for allowing Chief to chase her fox again and costing her a milk bucket, and then throws a pie at him when he doesn't seem to care about the milk incident. Later, when a fair comes into town, Widow Tweed enters Abigail in a Milking Contest, and both win the first prize until Tod inconspicuously borrows her cow to help him with Copper's peanut butter problem.

At the end of the movie, Tweed and Amos have pie together but got interrupted by Tod and Copper rambunctious playing, which is a result, she attacks Amos with a broom.

On the show, Widow Tweed and Widow Lucas are the same characters. It is particularly evidenced by the canonical novel Red's Untold Tale, where she protects her werewolf granddaughter, Red, from hunters, in particular, Amos Slade. It is mentioned Amos used to have feelings for her back when they were younger and they're stil on friendly terms in the present.

"Amos Slade! That temper of yours is going to get you into a lot of trouble someday!"

Widow Tweed and Tod share a sad good-bye together

Widow Tweed in The Fox and the Hound 2 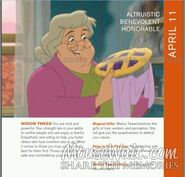