October 21, 2018 (Original)[2]
The Wildlife Express Train is a transport ride at Disney's Animal Kingdom that takes guests from Africa to Rafiki's Planet Watch and back. On the ride, guests get the chance to see some of Animal Kingdom's backstage facilities, including animal holding buildings for rhinos and elephants, among other animals.

It takes about seven minutes to travel from the Harambe railway station in Africa to Rafiki's Planet Watch and an additional five to return. The full journey is a 1.2-mile round-trip.

The railway is part of the fictional Eastern Star Railway, running from Lusaka to Nairobi and Kisangani.

The staff members of the wildlife express 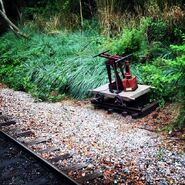 A Handcar sits on display near the Harambe station