BD Wong
Will Du is the number one Global Justice agent. He is both extremely confident and devoted to being the best at his job. He initially looks down on Team Possible because they are freelance "amateurs", but eventually accepts them as allies if not equals.

Will carried himself with a great deal of confidence, and did not hesitate to display his superiority at any given chance. This tended to quickly put him on the average person's bad side. However, Will could be charming and respectful when faced with those he considered to be his equals or betters, such as Ann Possible. Judging by his arrogance and apparent habit of tasering any unauthorized person who came within one meter of him, Will was far from approachable.

Will apparently had some martial arts training, and bragged that he was tutored by some of the world's greatest minds. Also, his high position in Global Justice suggested that he was highly trained and very intelligent. Despite this, he did not seem very experienced with or comfortable in battle situations, which may explain why Dr. Director wanted him to work alongside Kim Possible.

Will initially dismissed Kim as an amateur and assumed he could learn nothing from her, a stance that instantly irritated her. After they successfully completed a joint mission, Will did apologize to her for his rudeness, although he still only considered her an assistant, rather than an equal as Kim demanded to be treated.

Will found Ron to be both annoying and slightly disgusting. Although Ron did not seem unperturbed by Will's arrogance, Will did take exception to the fact that Ron assumed Will learning from tutors meant that he was remedial. 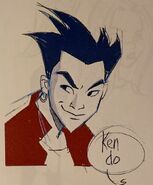