Finn got his start at working as an animator for Don Bluth's 1982 animated film The Secret of NIMH. Moving to Disney, he served as an animator for films, such as Oliver & Company, The Little Mermaid, The Rescuers Down Under, Beauty and the Beast, Aladdin, Pocahontas, and The Hunchback of Notre Dame. He also wrote, directed, and produced the 2004 feature film, Home on the Range (along with John Sanford). 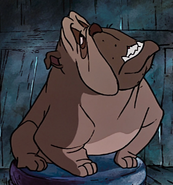 Hollywood Fish (Voice)
Add a photo to this gallery

Retrieved from "https://disney.fandom.com/wiki/Will_Finn?oldid=4053110"
Community content is available under CC-BY-SA unless otherwise noted.