1990-present
William "Will" Sasso is a Canadian comedian, actor, voice actor, and podcaster, who is best known for starring as Pete on the BBC sci-fi program Doctor Who and Curly in the 2012 film reboot of The Three Stooges. He is also well-known for starring in the Canadian sitcom MADtv for five seasons straight, and for voicing Phil Coulson in the stop-motion sketch comedy series Robot Chicken.

For Disney, he played the Pizza Delivery Guy in Homeward Bound II: Lost in San Francisco, and voiced Heckler in Lilo & Stitch: The Series. He also portrayed Deputy O'Mally in College Road Trip and a Manintenance worker in the ABC TV show, Grey's Anatomy. 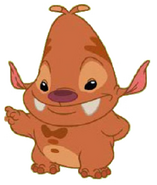 Heckler
(Lilo & Stitch: The Series)
Add a photo to this gallery

Will Sasso at premiere of College Road Trip in March 2008.

Will Sasso arrives at the 2013 Nickelodeon Kids' Choice Awards.

Will Sasso attending the 2019 Disney ABC TV Upfront.
Add a photo to this gallery
Retrieved from "https://disney.fandom.com/wiki/Will_Sasso?oldid=3745931"
Community content is available under CC-BY-SA unless otherwise noted.