Disney Wiki
Register
Don't have an account?
Sign In
Advertisement
in: Characters, Genies, Once Upon a Time characters,
and 17 more

Guards, Jafar, Jabberwocky (Once Upon a Time in Wonderland), Rumplestiltskin, Anastasia's mistreatment, being poor, being in Cora's service, water

“Give a man the proper motivation, you never know what he might be willing to do.”
―Will to Alice

Before the First Curse

In his early life, Will lives with his beloved younger sister Penelope in The Enchanted Forest, where he is a thief. After her tragic death from drowning, Will travels to the Land of Oz to deal with his heartbreak. While there he crosses paths with the legendary thief Robin Hood, who inexplicably saves him from a guard.

Robin Hood is in the midst of searching for an elixir from the Wicked Witch of the West for Rumplestiltskin, to help his wife, Maid Marian and he secure their future. In hopes of using the elixir himself, Will offers his assistance in sneaking into the Emerald City. Robin Hood grateful for his aid in his quest, and realizing Will needs the elixir more than he does, slips it on Will's person when wishing him farewell.

With the elixir on hand, Will returns to the Enchanted Forest and to his beloved, a beautiful maiden named Anastasia. Wishing to see other worlds he hears rumors of a magical looking glass that can grant a person the ability to cross realms. Sharing this news with Anastasia, who always had the same dreams the two plan a way to get the mirror. Reuniting with his old friend Robin, he applies to become a Merry Men, and after helping rob a snooty noble he is accepted into the gang. This is when he convinces Robin Hood and the Merry Men to raid the Dark Fairy Maleficent's lair, the Forbidden Mountain, for gold and riches for the people, while in reality hoping to steal the looking-glass, which is in her possession.

No longer a member of the Merry Men, and with the looking-glass in his possession he returns to Anastasia. After continually witnessing the abuse that his love Anastasia endures from her mother, he convinces her to leave the Enchanted Forest with him, to a place where they could be happy and free. The two are accosted by Anastasia's mother, disciplining her daughter for even considering leaving her life of privilege. After bidding her mother farewell, Anastasia agrees, and the two jump into the looking-glass, heading for Wonderland on her request, to a new home and hopefully a better life.

Their life is far from easy in Wonderland however. Though the two have their love for one another, they live in constant poverty and always in fear of starving to death. One day while searching for berries surrounding their wagon, they smell delicious baked goods. Wagons filled with pastries are heading to the King's palace. Together they steal upper-class garments and sneak their way into the ball.

While Will is pilfering food for the two, Anastasia cannot help but act as she once did in efforts of pleasing her Mother, like a lady of High Society. This act ends up being thrown in their face after the Red King has her and Will thrown out. Though Will calls the plan a success, emptying his pockets of enough baked goods to last them a month, Anastasia cannot help but remember and long for the elegance of the Palace. She remembers that Will was once a Merry Men, and convinces him to embrace his former life as a thief, by stealing from the Palace, then leaving Wonderland, and sell the Red King's Jewels and Treasures to start again in a new land. Will reluctantly agrees to the plan, however to his disbelief he witnesses the Red King introduce his new Queen to the people of Wonderland, Anastasia.

Still not giving up on his Ana, the night before the wedding Will breaks into her chambers within the palace. He begs her to tell him that it's just a part of the con, that she will marry the King for his wealth and power, only to steal it and leave with Will to another land. Anastasia says nothing of the sort, but he sees that a part of her is still clearly in love with him. As the guards descend upon the two of them, he asks that she meet him at their wagon by the dawn.

He eagerly awaits the return of his love, but instead he is greeted by Cora, the Queen of Hearts, who informs him that Anastasia isn't coming. Heartbroken without Anastasia, he asks her to rip his heart from his body and later becomes the Knave of Hearts in her army. He later befriends Alice while supposedly hunting for her under the Queen's order. With Alice's help, he steals his heart from the Queen's vault and prepares to leave Wonderland. When the Dark Curse was enacted, Will was sent to Storybrooke and given false memories.

After the First Curse

Upon the breaking of the curse, the White Rabbit approaches him, claiming that Alice was in trouble. He and the Rabbit travel to Victorian England and plan an escape attempt to rescue Alice. The two locate her in an asylum, placed their by her father, and rescue her before she undertakes a procedure that will remove her memories of Wonderland and her Genie. The Knave and Percy reveal to Alice that her true love Cyrus is still alive, and the three of them make a break from the asylum, journeying through a rabbit hole back to Wonderland.

Upon arriving, the Knave tells Alice that he never wished to return to Wonderland, and he would rather not continue on the journey. Alice offers him three gem wishes in exchange for helping her; he agrees and the three begin their search for Cyrus. On their journey, Will is captured by the Red Queen who is told by Jafar to kill him as he is of no use to their plan of getting Alice to use her wishes. Because of their past together, the Red Queen originally refuses to kill the Knave, though sets him up for execution upon his taunts. Just before he faces public beheading, Alice saves the Knave and the two escape, only to be found in the maze by both Jafar and the Red Queen. When Jafar nearly strangles the Knave to death, Alice makes her first wish that if the Knave dies, she should die also. Instead, Jafar turns the Knave to stone.

The Red Queen later saves him with magical dust that she has Alice retrieve. Later, it is revealed that his heart was taken from him and that Alice helped him get it back, though he declined to put it back because of the pain Anastasia caused him. As Alice and Cyrus are reunited upon his escape, the Red Queen takes Cyrus to meet Alice, together with the Knave and Percy, while Jafar casts a curse to kill the Red Queen. Alice reluctantly orders White Rabbit to dig a hole to take the group away from the curse, though a lightning bolt rebounds from the Red Queen's genie bottle and injures the Knave. Because of Alice's first wish, she temporarily dies in Cyrus' arms until the Knave makes Alice's final wish by wishing for her suffering to stop. Alice awakens and learns that the Knave has freed Cyrus from his genie status, though the Knave trades his place within the bottle.

The bottle is found by Lizard who's amused to find the Knave now a genie. They travel together, Lizard using a wish to have a wonderful gown and soon confessing she's always loved the Knave. He tells her he can't love anyone and when she wishes he could feel the way she does, she suddenly dies with the Knave feeling the agony of her pain. His bottle ends up with the Red Queen but Jafar and the Jabberwocky torture her to force her to use her wishes to free the Knave up.

He gives the Knave back his heart so he can feel the agony when Jafar stabs the Red Queen to death before his eyes. Jafar forces the Knave to steal from Alice and Cyrus with the promise to bring Anastasia back to life. When Jafar rewrites the rules of magic, he does resurrect the Red Queen but makes her fall in love with Jafar to torture Will. The Knave is able to break through the spell by kissing the Red Queen who helps Alice defeat Jafar. When his magic fades, the Red Queen dies once more but Cyrus uses water from the Well of Wonders to bring her back to life. Will and Anastasia are thus able to finally be together. Will, alongside with Anastasia and their other Wonderland friends travels to Victorian England for Alice's wedding and returns shortly after as Anastasia's co-ruler, The White King.

After the Second Curse

Sometime later, Will was brought back to Storybrooke again by the Dark Curse when Snow White enacted it in the Enchanted Forest. He meets Robin Hood and apologies for his actions years ago. They then team up in search for "The Author" when Regina asked help from Robin. When the Spell of Shattered Sight was enacted by Ingrid, Will ended up in a fight with Hook and resume to his normal self when the curse ended.

It has yet to be explained what happened to Ana, but when asked, Will told Robin that she was 'gone'. He initially was heavily depressed and drunk all the time, but cleaned himself up sometime after the spell of shattered sight.

Six months later, Will has sobered up and begun dating Belle, who he views as a kindred spirit, but the origin of the relationship has yet to be revealed. 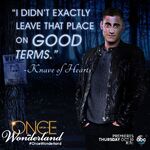 Will comes to Alice's rescue

Will helpless to stop him, watches Jafar stab Anastasia to death

Will and Percy, The White Rabbit

Will stands up against Anastasia's mother

Will and Anastasia share True Love's Kiss once more

Will and Anastasia at Alice and Cyrus' wedding