2001-present
Willa Joanna Chance Holland is an American actress, voice actress, and fashion model, who is best known for her television roles as Kaitlin Cooper on the Fox teen drama series The O.C. from 2006 to 2007, and starred as Thea Queen on The CW superhero drama series Arrow from 2012 to 2020 (main role from season 1-6, special guest star in season 7, and recurring role in season 8). 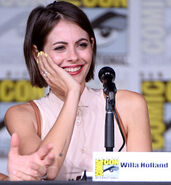