English
Willie the Operatic Whale, also known as The Whale Who Wanted to Sing at the Met, is an animated short released in 1946. It was produced by Walt Disney, and Nelson Eddy provided the voice of both the narrator and various characters. It was released theatrically as a segment in Make Mine Music, then re-issued the following year accompanying a re-issue of Fantasia (as a short subject before the film), then separately on home video in the 1990s. The short was also reissued on August 17, 1954.

News comes to the music and science world of a whale that can sing opera. The news is met with disbelief and jeers from the musical and science communities. One person who may have a different theory about the whale's reputed musical abilities is opera showman Tetti-Tatti. He believes that Willie the Whale has swallowed an opera singer and is holding him prisoner in his belly. Hiring an expedition, the showman heads for the North Pole to kill Willie. But the whale tries to show the impresario that he can really sing opera. Some time after, we, the viewers, see a montage of what would be Willie's performances in the Metropolitan Opera House (montage sequences include Pagliacci, Tristan and Isolde, and Mephistopheles). After the montage, however, despite all of Willie's efforts, Tetti Tatti shoots his spear gun and kills Willie.

However, even though Willie is long gone, his spirit lives on in Heaven, singing in a hundred voices, forever. 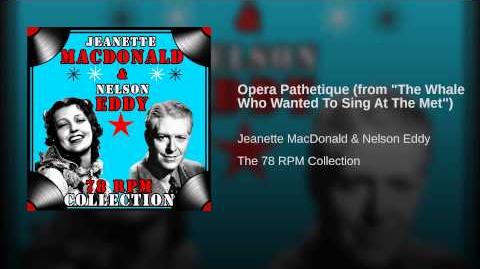 Willie as the princess in "Aida"

Retrieved from "https://disney.fandom.com/wiki/Willie_the_Operatic_Whale?oldid=4248601"
Community content is available under CC-BY-SA unless otherwise noted.