Start a Wiki
Willow is a recurring character in Liv & Maddie. She is on the girls' basketball team, a friend of Maddie Rooney, and has a crush on Joey Rooney. Willow is portrayed by Jessica Marie Garcia.

Willow is a tough and brunette girl, who claims she "doesn't go down". She takes her basketball seriously and is sometimes shown to have a soft side.

In Team-A-Rooney, Willow, along with her teammates, tries to keep the basketball team up and running. In Sleep-A-Rooney. she helps Maddie with a school project.

Willow is a 16 year old girl with black hair and brown eyes.

She is good at basketball.

Joey is her weakness. When she is around him she acts soft. Even if anyone mentions anything, often she will find some complicated way to associate that with a stalker-like question about Joey.

(Team captain)
Maddie is Willow's team captain and friend. They've worked on a school project together.

(Crush)
Willow has a crush on Joey. Sometimes she will do anything to get closer to him. It is obvious that he does not feel the same way, but maybe later he'll feel something for her. 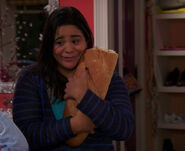 Retrieved from "https://disney.fandom.com/wiki/Willow?oldid=3704658"
Community content is available under CC-BY-SA unless otherwise noted.