Demi Lovato (2010-2016)
Wilmer Eduardo Valderrama is a Venezuelan-American actor and television personality who is best known for his role as Fez on the Fox sitcom That '70s Show, as well as hosting the MTV series Yo Momma. He is also well-known for voicing Rodrigo in Clifford's Really Big Movie and Prince Charming in the 2018 family animated film, Charming.

For Disney, he voiced the character of Manny in the Disney Junior children's show, Handy Manny. In 2010, Valderrama guest-starred on Disney Channel's series Wizards of Waverly Place, playing the role of Theresa Russo's brother, Ernesto. He also played Kyle Diaz in the ABC TV show, Grey's Anatomy and voiced the character Gaxton in the 2020 Pixar film Onward. 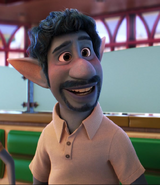 Gaxton
(Onward)
Add a photo to this gallery

Wilmer Valderrama at opening of Marquee Nightclub in May 2012.

Wilmer Valderrama speaks at the Minority Report panel at the 2015 Summer TCA Tour.

Wilmer Valderrama arrives at the 61st annual Grammy Awards in February 2019.
Add a photo to this gallery

Retrieved from "https://disney.fandom.com/wiki/Wilmer_Valderrama?oldid=4127373"
Community content is available under CC-BY-SA unless otherwise noted.