Winnie the Pooh, and Christmas Too

English
Winnie the Pooh and Christmas Too is a Christmas special based on the Disney television series The New Adventures of Winnie the Pooh, originally broadcast on December 14, 1991.

Two days before Christmas, Christopher Robin writes a letter to Santa Claus for him and his friends in the Hundred Acre Wood, asking for the following presents: Rabbit wants a new fly swatter to keep the bugs out of his garden, Eeyore wants an umbrella to keep the snow off his house, Tigger wants a snowshoe to wear on his tail so he can bounce in the snow, but all Christopher Robin wants is a sled "big enough for me and maybe a friend or two." After finishing the letter, he casts it into the wind.

The next day, Winnie the Pooh realizes, after Piglet informs him, that he didn't ask for anything himself, so they go find the letter, which hasn't gone very far. Afterwards, they, along with Tigger and Eeyore, go to Rabbit's house and rewrite the letter to include what Pooh wants (a pot of honey, of course). Along the way, they each upgrade their desired presents (Rabbit wants a bug sprayer, for instance).

Following this, Tigger, Eeyore, and Rabbit get a tree big enough for "the stuff we're gettin'", with help from a reluctant Gopher (he's supposed to be hibernating). In the meantime, Pooh and Piglet return to where Christopher Robin sent the letter and Pooh recasts it into the wind. But the wind shifts southward, and the letter follows Pooh back to his house. Knowing that the rest of the gang won't get their presents as a result of this, Pooh takes it into his (and Piglet's) hand to make sure the gifts are delivered.

Disguised as Santa, Pooh sneaks out and delivers Tigger, Rabbit, and Eeyore a super-bouncer barrel, a bug sprayer, and a mobile home, respectively – or rather, poorly handmade versions of said items that break apart upon use. Demanding to know what's going on, the three of them corner "Santa", who insists that he is who he claims to be. But then, Piglet (who is disguised as a reindeer) slips after Pooh snaps the reins and makes his sleigh fall downhill, thus losing Pooh's disguise and exposing him to all.

After explaining what happened, Pooh decides to try and deliver the letter to Santa himself, leaving the rest of the gang behind to wait up for him. But he does not get very far in his journey before the wind suddenly takes the letter, so he gives up and goes back to the gang. By this time, the others are sad at missing the bear, especially Piglet, who has then grown a conscience and decided that his best friend was more important than Christmas, and then offers to give up his present to have Pooh here, to which the others agree. Eventually, Pooh comes home, to their delight. Even after he tells them that he failed in delivering the letter, though, they're happy to have him back, because now they've realized what Christmas is really about. Afterwards, Christopher Robin rides into the scene on his sled and brings them the gifts they had originally asked for to begin with.

The special was first broadcast on ABC on December 14, 1991. It was prefaced with an introductory segment by the Walt Disney Company's then-current CEO Michael Eisner, accompanied by the walk-around costumed characters of Pooh, Tigger, Rabbit, and Eeyore, who bring in a palm tree to use as a Christmas tree. To fill out the hour the special was scheduled for, it was followed up by the Donald Duck cartoons The Hockey Champ and Bearly Asleep, and ended with a sneak peek at Beauty and the Beast. The first airing of the special ranked 53rd out of 92 shows that week, averaging a 10.8/20 rating/share and tying for first place in its timeslot.[1]

The original format of the special, with the addition of the Donald Duck cartoons, was repeated the following year, this time with a behind-the-scenes look at The Muppet Christmas Carol at the end. The next year's broadcast included a documentary on the making of Aladdin. The special was later aired on CBS in 1995, this time accompanied by The New Adventures of Winnie the Pooh episode "Magic Earmuffs" and a documentary about the making of Toy Story in place of the Donald Duck cartoons.[2] The special subsequently returned to ABC following Disney's acquisition of that network and continued to be shown there from then until 2000, now without Michael Eisner's introductory segment.

The special stopped airing on ABC after 1999, but was brought back to the network in 2007. It was then aired as part of the 25 Days of Christmas on ABC Family (now Freeform) from 2008 to 2013. Infamously, the 2007-2013 broadcasts abruptly cut out two scenes - specifically, the scene with Tigger telling Eeyore that Santa's probably reading their letter right now when suddenly Pooh and Piglet show up with the letter, and the scene where Pooh says goodbye to Piglet, Rabbit, and Tigger as he heads off to deliver the letter to Santa. After being dropped from the line-up in 2014, it was brought back in 2018 with the two scenes reinstated; however, the scenes with Gopher helping Tigger, Rabbit, and Eeyore find a new tree, and Pooh and Piglet seeing the new tree were now cut.

The special was released on VHS on November 13, 1994, with "Magic Earmuffs" included as a bonus episode. Early copies of the tape also included a bonus Spot the Dog cartoon, "Spot's Winter Sport", which was dropped in later reissues. The special and "Magic Earmuffs" were also featured on a double-feature Laserdisc release titled Winnie the Pooh: Special Holiday Edition, which also included The New Adventures of Winnie the Pooh episodes "The Monster Frankenpooh", "Things That Go Piglet in the Night", and "Pooh Moon".

Currently, the special itself has not had its own individual DVD or Blu-ray release, but it is integrated as a flashback in the 2002 direct-to-video film, A Very Merry Pooh Year. However, it is slightly edited to better match the new animation made for the rest of the film - Christopher Robin's lines were re-dubbed by William Green, and Rabbit's animation was recolored to his usual yellow-furred appearance (as opposed to the oddly light-green hue his fur had in the special and the New Adventures series), though Paul Winchell's recording from the special remains, here as opposed to having Jim Cummings (who voices Tigger in the newer footage) to dub over him. 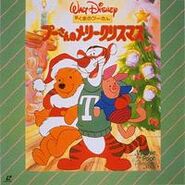 Retrieved from "https://disney.fandom.com/wiki/Winnie_the_Pooh_and_Christmas_Too?oldid=4076351"
Community content is available under CC-BY-SA unless otherwise noted.