Winnie the Pooh and Tigger Too

Winnie the Pooh Discovers the Seasons
Winnie the Pooh and Tigger Too is the third Winnie the Pooh short from Walt Disney Productions, released in theaters on December 20, 1974 as a double feature with The Island at the Top of the World. It was nominated for an Academy Award for Best Animated Short Film, also given to Closed Mondays. It was later added as a segment to The Many Adventures of Winnie the Pooh (March 11, 1977). A soundtrack album was released simultaneously and featured such songs as "The Honey Tree" and "Birthday, Birthday." The film, whose name is a play on the slogan "Tippecanoe and Tyler too" made famous during the 1840 United States presidential election, is based on stories from Winnie the Pooh and The House at Pooh Corner.

In 1975, Winnie the Pooh and Tigger Too won the Grammy Award for "Best Album for Children" (this fact is mentioned during the pop-up facts during the film as a bonus feature for the 2002 DVD release of The Many Adventures of Winnie the Pooh).

Tigger has been bouncing on anyone he comes across for fun, which gets on Rabbit's nerves after he ruins his garden. After holding a meeting with Pooh and Piglet, Rabbit decides to take everyone, including Tigger, out into the Hundred Acre Wood. But during the trip, Rabbit, Pooh, and Piglet purposefully ditch Tigger on the hopes he would get lost. The three hide in a log as Tigger searches for them. While searching, Tigger gets his tail caught on the log the three others are hiding in, but the others secretly get his tail free without him knowing they are hiding. The three then try to make it back home, but due to it being so misty they end up getting lost and wind up at a certain spot in every direction they take.

Pooh offers a silly suggestion to search for that same spot, and Rabbit abandons them to try to prove Pooh wrong. Pooh and Piglet find their way out of the mist by themselves. This was possible because, according to Pooh, 12 honeypots were calling to his stomach and he "couldn't hear them before because Rabbit would talk", and lets it find the way out. This is where they come across Tigger, who had escaped the mist with ease earlier, realizing that Rabbit's plan to lose him had failed. Pooh tells Tigger that Rabbit is still about in the mist so Tigger goes off to find him, for by this time, Rabbit has become lost trying finding his way home (unaware at the time that Tigger had already gotten out of the mist and was already on his way back to retrieve him), and ends up in a dark, damp and misty part of the forest, to add to that he's scared by various animal noises. Frogs start croaking loudly, caterpillars munch loudly on leaves and after seeing frogs sitting there in front of him (plus more appearing and making more noise) it scares the living daylights out of him. The sounds get to him so badly that it drives him mad causing his eyes to make whirlpools and he frantically tries to run away only to be tackled by Tigger, who declares that Tiggers like him don't get lost easily, and then takes Rabbit home.

It's now snowing and Roo wants to go play. Kanga can't be with him, so she calls on Tigger to look after Roo which he gladly accepts. Along the way through the woods, Tigger and Roo see Rabbit skating on the ice. Tigger tries to teach Roo how to ice skate by doing it himself, but unfortunately, he loses his balance and collides with Rabbit and the result is Tigger sliding across the ice into a snowbank and Rabbit crashing into his house. Tigger then decides that he doesn't like ice skating. Later on, while bouncing around the woods with Roo on his back, Tigger accidentally jumps too high up a tree and is too scared to get down. He calls for help and Pooh and Piglet come to the scene. Roo successfully jumps down but Tigger refuses to follow suit.

Soon, Christopher Robin, Rabbit and Kanga arrive and try to convince Tigger to jump. Eventually, Rabbit decides that the group would just have to leave Tigger in the tree forever, on which Tigger promises never to bounce again if he ever was released from his predicament. Sebastian Cabot (the narrator) chimes in for help. Tigger begs Cabot to "narrate [him] down from [the tree]," and Cabot tilts the book, allowing Tigger to step onto the text of the page. Tigger starts to feel better that he made it this far and before he can do otherwise, Cabot tilts the book again causing Tigger to fall down into the snow. Happy, Tigger attempts to bounce but Rabbit stops him reminding Tigger of the promise he made. Devastated, Tigger sadly walks away and Rabbit feels better that there will be peace. But everyone else is sad to see Tigger like this and remind Rabbit of the joy Tigger brought when he was bouncing. Suddenly, Rabbit feels sorry for Tigger and takes back the promise he made and is given a friendly tackle by an overly-excited Tigger. Tigger invites everyone to bounce with him and even teaches Rabbit how to do it. For the first time, Rabbit is happy to be bouncing, as is everyone else and Tigger sings his trademark song for the last time.

Most 80's and early 90's copies of this short used on home video releases (like the Mini Classics VHS series) uses a late 70's TV print with 2 edits:

Main article: Winnie the Pooh and Tigger Too (video) 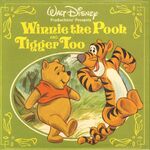 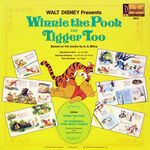 Start a Discussion Discussions about Winnie the Pooh and Tigger Too