Winnie the Pooh and the Honey Tree

Winnie the Pooh and Tigger Too
Winnie the Pooh and the Blustery Day is an animated featurette based on stories from Winnie-the-Pooh and The House at Pooh Corner by A.A. Milne. The featurette was produced by Walt Disney Productions, and originally released by Disney's Buena Vista Distribution on December 20, 1968 as a companion to the film, The Horse in the Gray Flannel Suit. This was the second of the studio's Winnie the Pooh shorts. It was later added as a segment to The Many Adventures of Winnie the Pooh (March 11, 1977). The music was written by Richard M. Sherman and Robert B. Sherman.

Winnie the Pooh and the Blustery Day won the 1968 Academy Award for Animated Short Film. The Oscar was awarded posthumously to Walt Disney, who died more than two years before the film's initial release. It is also the first and only Winnie the Pooh production that has won an Academy Award. (Winnie the Pooh and Tigger Too, released 6 years later in 1974, was nominated for the same Academy Award, but lost to Closed Mondays.) It is also the first Disney film to feature the MPAA logo (unveiled in 1968) in the credits. The short appears as a bonus feature on the 2006 DVD of Pooh's Grand Adventure: The Search for Christopher Robin.

At the beginning of the story, Gopher tells Winnie the Pooh that it is "Winds-day" (a play on "Wednesday"), where upon Pooh decides to wish everyone "Happy Winds-day". He visits his friend, a young pink pig named Piglet, who wears a scarf around his neck on this day. Piglet is blown into the air, his scarf unravelling all the while, and Pooh grabs hold of him. As they fly like a kite through the air, over the other characters' heads, Pooh wishes Kanga, Roo, Eeyore, Rabbit, and Owl a happy Winds-day. But when they arrive at Owl's house, he informs them that the wind is due to "a gentle spring zephyr" rather than to a particular holiday. During the windstorm, Owl's house is knocked down, and Eeyore decides to find a new house for Owl.

That night, Pooh hears an unfamiliar noise coming from elsewhere in the Hundred Acre Wood. There is a knock on his door, then Tigger bounces inside in search of something to eat. After singing his signature song, he tries some honey, but dislikes it. Before leaving Pooh’s house, Tigger tells him that there are Heffalumps and Woozles in the forest and that they steal honey, Pooh's favorite food. Later, Pooh suffers from a nightmare in which Heffalumps and Woozles steal his honey while the song "Heffalumps and Woozles" plays.

Later that night, a storm floods the Hundred Acre Wood. Piglet, who is trapped in his home, writes a bottle-note for help, just before the waters carry him away, him riding a chair. Pooh, who is trapped in a honey pot, floats away from his home as well. The remaining beloved characters gather at Christopher Robin's house, and Christopher discovers and reads the message ("Help! P-P-P-Piglet [Me]!"). He then sends Owl to inform Piglet of a rescue plan in the works, but just after he delivers the news, Piglet and Pooh are mixed up in a waterfall which switches Piglet to the honey pot and Pooh to the chair. When they arrive together at Christopher Robin’s house, he mistakenly thinks that Pooh rescued Piglet, and throws a hero party for Pooh.

During the party, Eeyore announces that he has found a new home for Owl. But everybody, unfortunately, learns that the one Eeyore found is Piglet's house. They are shocked and dismayed and try to tell Eeyore that Piglet already lives there. However, Piglet decides to reluctantly give his home to Owl, to which a touched Pooh offers to let Piglet live with him. Pooh suggests to Christopher Robin that the hero party should become a two-hero party because of Piglet’s generosity. He agrees, and the characters celebrate both Pooh’s and Piglet's good deeds that day.

Main article: Winnie the Pooh and the Blustery Day (video)

"I think I should wish everyone a happy Winds-day, and I should begin with my very dear friend, Piglet."

"Come on in and make yourselves...comfortable?"

Now Pooh decided to invite the new sound in.

"I must rescue my supper."

"Now, is the next chapter all about me?"

No-no, it's mostly about Tigger. 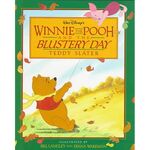 The master of this short used on the 1989 NBC TV Broadcast and on the 1990s UK home video releases uses slightly modified opening titles: