Winnie the Pooh and the Honey Tree

Winnie the Pooh and the Honey Tree is an animated featurette released by Buena Vista Distribution on Friday, February 4, 1966. Based on the first two chapters of the original Winnie-the-Pooh book by A.A. Milne, it was the studio's only Winnie the Pooh production released before Walt Disney's death ten months later. It was later added as a segment to The Many Adventures of Winnie the Pooh. Music and lyrics were written by the Sherman Brothers, (Richard M. Sherman and Robert B. Sherman). Background music was provided by Buddy Baker. This featurette served as a companion to the film The Ugly Dachshund.

The storybook opens with an overweight teddy bear named Winnie the Pooh (also called "Pooh Bear") in the Hundred Acre Wood going through his morning stoutness exercises, during which he accidentally rips the stitching on his bottom. After repairing his torn rump, he discovers that his jar of honey is nearly empty and starts wondering where he can get honey as he eats what is left in the pot. He hears a bee fly by and tries to pull his head out of the jar, then decides to try to get honey from the bee's hive in the nearby honey tree.

He first tries climbing the tree, but that does not work when the branch he is standing on breaks, and he tumbles to the ground into a "gorse-bush". He then borrows a blue balloon from a human boy named Christopher Robin in an attempt to fool the bees and get the honey. Cleverly, Pooh disguises himself as a little black rain cloud by dunking himself with mud, and then uses the balloon to float up next to the hive. A lone bee guard flies out to meet him and is very wary of the little black rain cloud. Pooh sticks his hand into the hive and accidentally pulls out a giant handful of honey with bees on it, eating the honey, but spitting the bees out after a lengthy battle in his mouth. Among them is the queen bee, who is ticked off with Pooh Bear and kicks her away, making her fall into the same muddy spot in which he disguised himself.

Pooh is soon surrounded and attacked by angry bees from the hive, his disguise wearing off. After getting out of the mud puddle, the queen bee sees that the little black rain cloud is actually a bear, and shook the mud off of herself. Angry, the bee shoots up toward Pooh and stings his bottom as revenge for knocking her in the muddy spot. The sudden hit causes Pooh to swing upward and back, jamming his rear into the bottom of the hive. The head bee rests on a nearby branch and starts laughing heartily at Pooh's expense. The now nervous Pooh admits to Christopher Robin that these are the wrong sorts of bees, and is shoved out of the hole by the incensed insects who proceed to give chase.

During the pursuit, the string holding the balloon closed comes loose and the balloon flies out of control. Pooh is taken for a wild ride as the bees continue to chase him. The queen bee continues laughing but is now forced to take cover as her quarry whizzes by her twice. The chase is suddenly reversed as the bees are now chased by Pooh. The bees retreat into their hive and Christopher Robin's balloon deflates its last bit of air. The defeated bear inevitably falls back to earth and lands in the arms of Christopher Robin. The queen bee calls the others to attention with a buzzing "CHARGE!" and the swarm gives chase after the two who seek safety in the mud puddle. Pooh then confesses, "You never can tell with bees!" before spitting out one more bee.

Pooh visits Rabbit, hoping to finding honey there. Although Rabbit is aware of the bear's vast appetite, he welcomes him for lunch and gives him a small drop of honey. The honey, however, doesn't fill Pooh's stomach all the way. So he asks for more. Rabbit is hesitant but agrees, and so in a very gluttonous manner, Pooh devours every jar of honey in Rabbit's house.

Pooh, his face covered with honey and all sticky, thanks Rabbit and eats leftover honey on his stomach, which is now extremely round and full. He tries to leave through Rabbit's front door, but has become extremely large from the vast amount of honey he has eaten — so fat that Pooh gets stuck in Rabbit's front door. Rabbit tries to free Pooh by pushing his over-sized bottom but it isn't any use. He goes round to the front of the house to face Pooh's head, and tells Pooh, truthfully, that he has eaten too much, and as a result, he has grown too fat for Rabbit's front door (Rabbit says it has happened because Pooh has eaten too much but Pooh claims it has happened because Rabbit's front door isn't big enough). Rabbit then goes off to find Christopher Robin for help. While he waits, Pooh is visited by Owl and Gopher. Owl analyzes Pooh's peculiar situation and decides that the intervention of an expert is necessary. Gopher offers to free Pooh using dynamite, but Owl angrily declines. Gopher turns to leave and falls into one of his holes, stating he’s on a tight schedule.

Christopher Robin, Rabbit, and Eeyore arrive and try to help Pooh but they cannot budge him one inch from all the honey. Christopher Robin suggests pushing him back in but Rabbit protests. So everyone comes to a solution; Pooh will have to stop eating and get thin again. Roo gives Pooh honeysuckle. Before Pooh can eat the flowers, Kanga reminds him to smell them instead. Rabbit is forced to make the best of a bad situation, and devises various ways to disguise the bear's bottom as a hunting trophy, which turns out not to be a good idea (Pooh sneezes from honeysuckle just as Rabbit is decorating his bottom as an antiques shelf, the painting part of which tickles him).

One night, as Pooh sleeps, Gopher suddenly reappears, preparing to have his midnight snack when Pooh suggests that Gopher allow him to 'just taste' some of his honey. Gopher agrees to allow this, but soon Rabbit, fearing an extended period of Pooh being stuck, runs outside and stops Gopher, then posts a sign forbidding anyone to feed Pooh at all (Rabbit: "Don't Feed The Bear!"). Miffed by this ruling, Gopher decides to leave and falls into his hole again, stating again "that he’s not in the book, and ding-dang glad of it."

As the days go by, Pooh finally slims down enough to be freed, and Rabbit is delighted. Christopher Robin takes hold of Pooh's paws and starts pulling, Kanga then takes hold of the drum that Christopher was playing and hangs from a strap around his shoulder, then Eeyore takes hold of Kanga's tail, then Roo starts pulling Eeyore's tail, and finally Gopher takes hold of one of Roo's arms (and ends up falling into his hole once again when Eeyore's tail is accidentally pulled off too hard by both him and Roo). While the others are pulling on Pooh, Rabbit pushes from behind but the bear will not move.

Fed up with all this delay, Rabbit takes several steps backwards and charges into Pooh. Rabbit's push launches Pooh into the air towards the forest. (In a sight gag, Pooh almost flies out of the book, but is pushed back by the turn of a page at Gopher's harried insistence.) Pooh comes in for a landing in the hole of a similar honey tree, flushing out the same swirling swarm of bees that once fought Pooh. The gang runs after him and finds him stuck in the honey tree. Christopher Robin tells Pooh that they will help him get out again but Pooh tells them to take their time; the bees were scared away by his abrupt arrival giving the silly old bear a chance to enjoy a hive full of his favorite honey.

The scene where Rabbit deals with Pooh's being part of the "decor of his home" was not in the original book, but it was reportedly contemplated by Disney when he first read the book.

Most 80's and early 90's copies of this short used on home video releases (like the Mini Classics VHS series) uses a late 70's TV print with 3 small edits on the Pooh Coo Clock sequence, the scene where Pooh eats the honey covered with bees, and the scene when Rabbit yells "Honey?! Oh no!"

Main article: Winnie the Pooh and the Honey Tree (video) 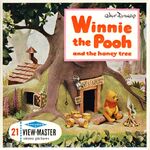