Home of the Hundred Acre Wood

The book holds the characters and settings of the story. Here, the animated characters are often seen interacting with the book's elements, such as reading the printed words or hopping from one page to another.

In Christopher Robin (2018), the book's pages are featured prominently at the beginning of the movie. This time, they also feature E.H. Shepard’s original illustrations, along with some new ones in the style of those illustrations.

The book was mysteriously given to Merlin in Kingdom Hearts in bad conditions. Sora had to go to different worlds to find missing pages and return them to the book.

The book as seen in The Tigger Movie

The book as seen in A Very Merry Pooh Year

The book as seen in The Book of Pooh

The book as seen in Winnie the Pooh

"...and Piglet, too!" (from Winnie the Pooh and the Blustery Day)

The Book as seen in Kingdom Hearts

The book as seen in Welcome to Pooh Corner 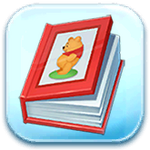 Retrieved from "https://disney.fandom.com/wiki/Winnie_the_Pooh_storybook?oldid=3898899"
Community content is available under CC-BY-SA unless otherwise noted.