Winston is the protagonist of the 2014 Disney animated short, Feast, which premiered before Big Hero 6 in theaters.

In regard to Winston's character, Director Patrick Osborne states, "He's a star terrier that's full of energy. Like any of us, Winston is looking for food and some kind of emotional connection." The stray Winston finds both the food and emotional connection he was looking for when he discovers a human named James on the other end of a French fry. The story follows their growing friendship over a 12-year span based on the meals that they eat, all seen from Winston's point of view. One day, a woman enters James' life. At first, this is a setback for Winston as nachos and spaghetti give way to Brussels sprouts and hummus. But, ultimately, Winston tries to rescue the faltering human relationship, despite the seemingly dismal food prospects. At that moment, "Winston rises above himself and becomes much more than a dog," as Osborne states. He steps out of his instincts and makes a sacrifice.

Born a stray, Winston's life changed forever when he was discovered by a human man named James. Adopted and named, Winston grew to truly love his new owner's bachelor lifestyle, especially as James begins to share his human food with the eager pup. Winston becomes a part of James' circle of friends and their rituals, including football viewing parties and guys' nights out at the local steakhouse. It is during one such night, however, that James meets a local waitress named Kirby... and Winston's happy life is changed. As James and Kirby continue their relationship, Winston's beloved junk food is gone, replaced with vegetables and hummus, all things no dog would ever eat. Reduced back to kibble, Winston falls into a depression that seems endless... until one night when James comes home and, having broken up with Kirby, seeks solace in food. At first happy that the status quo has been restored, Winston soon recognizes his friend's depression. Finally unable to ignore James' suffering any longer, Winston scrambles out through an open window and leads James on a chase through their neighborhood and right back to the steakhouse. Ignoring countless temptations, Winston is able to reunite James and Kirby. Winston resigns himself to this new life as his human marries and begins a life with his female. Finally, however, a human pup is born and Winston is reunited with his beloved junk food as the child grows and another is born. 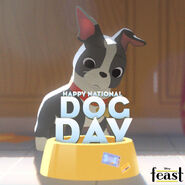 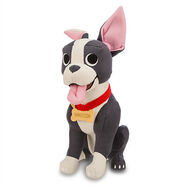 Winston graffiti drawing on a wall in Big Hero 6

Winston tries a sprout for dinner

Add a photo to this gallery
Retrieved from "https://disney.fandom.com/wiki/Winston_(Feast)?oldid=3647557"
Community content is available under CC-BY-SA unless otherwise noted.