Hibler was born in Harrisburg, Pennsylvania and was educated at the American Academy of Dramatic Arts. He initially began his career as an actor before switching to writing. He took up freelance writing for magazines and radio to help supplement his income.

In 1942, Hibler joined Walt Disney Productions as a camera operator. Then later on, he worked as a technical director for the U.S. Army training films. He soon moved to the story department where he contributed to animated features, like Melody Time, The Adventures of Ichabod and Mr. Toad, Cinderella, Alice in Wonderland, Peter Pan, Sleeping Beauty. As a songwriter, Hibler contributed lyrics with Ted Sears, who wrote songs for some musical films, like "Following the Leader" and "I Wonder".

Hibler also voice-over roles in documentary films, and some series in True-Life Adventures and People and Places as well the "It's a Small World" attraction soundtrack album. 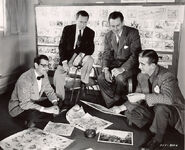