Disney Wiki
Register
Don't have an account?
Sign In
Advertisement
in: Characters, Jake and the Never Land Pirates characters, Males,
and 11 more

Ruler of the Skybird Kingdom

The fact that the princess has returned

Flight
The Wise Old Parrot is a character from Jake and the Never Land Pirates. He first appeared in the episode "Birds of a Feather".

Long before Jake, the Wise Old Parrot, and the kingdom he lives in lost their princess. A few years later, the princess met Jake's parrot Skully as she received a mysterious note but does not understand what it means. Jake and his crew journey to the kingdom and returned who they learned is a princess. The Wise Old Parrot informed her of her past and began a celebration that was soon interrupted by Captain Hook who stole the royal crown. Jake defeated the villain and sent him falling from the kingdom hidden in the sky. Peace is restored and the natives, as well as Jake, celebrated.

The Wise Old Parrot would later appear in "Skybird Island is Falling". In this episode, just as the Wise Parrot began telling Skully of their ancient tree, Captain Hook, and his crew appear and steal the golden leaves causing the island to sink to the Never Sea. Thankfully, the Wise Old Parrot's kingdom is rescued by Skully and his crew.

In the episode, "Sail Away Treasure", Jake and his crew discover Wise Old Parrot's ship, the Leaky Beak, on Shipwreck Beach. They soon restored the ship when they discover a treasure map on the ship's sail. Captain Hook plotted to steal the ship and the treasure located on Never Peak. Curious to find out what was hidden in the treasure chest and to whom the ship belonged, they soon found a clue leading the young pirates back to Skybird Island were they were greeted by Winger and Wise Old Parrot who revealed he was the Leaky Beak captain. Captain Hook and Mr. Smee soon arrive and attempt to steal both the treasure and the ship, Jake was about to give chase but Wise Old Parrot wasn't too worried about the treasure as Hook open the chest treasure revealed a whistle. Unknown to Hook, the whistle summons the Feathered Four the royal protectors of Skybird Island who swooped down and carried Hook off. In an attempt to rescue his captain, Smee pulls the wrong lever, retracting the ship's wings, and sending Smee and the Leaky Beak falling from the sky, only to be rescued by Izzy and her pixie dust. Thwarted yet again by Jake and his crew, Hook and Smee head back to the Jolly Roger. Skully, along with his mates, returns the Leaky Beak to the Wise Old Parrot, who gives the ship to Skully. 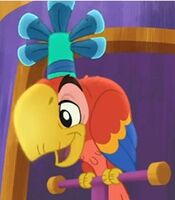 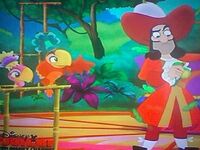 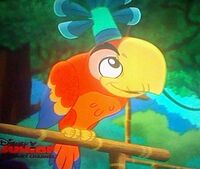 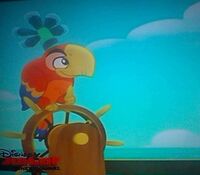 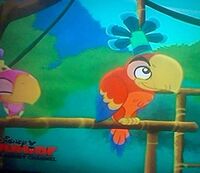 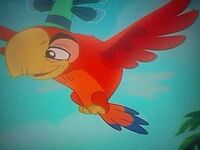 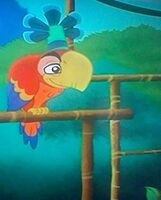 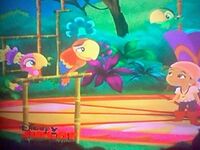 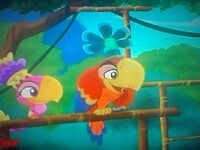 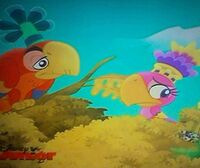