Mickey Mouse
"Wish Upon a Coin"

Mickey and Minnie’s wish to live happily ever after (along with everyone else's wishes), are put in danger after Pete steals all the coins from the wishing well.

As Snow White works, Mickey and Minnie hop on waters and splash Snow. Mickey and Minnie then tell a group of doves it's a wishing well and then sing "I'm Wishing", the 7 dwarfs throwing coins in the water, Mickey gets a coin inside Goofy's butt and he throws to hear the bell rings, he hugs and Mickey and Minnie throws him out, he gets a coin inside his pocket, he and Minnie kiss a coin and he throws it, attracting the attention of Pete, who is stealing coins and driving a car away. Mickey talks the wishes are gone while dwarfs and Goofy screamed but coins been stolen. Minnie tells those coins stole but gasped with Mickey, we have to get coins back. They run, Minnie steps on Sleepy and trip, Mickey surprises to go back and see her. She tripped while Mickey talks to kick, sit, and lick. She will stay here but he will get coins back, Goofy bites his foot, making her nervous.

At the city, Pete loves coins, he kisses it and sees Mickey. Pete brakes him out, who grabs a lamp, jumps out, standing on a street, Pete's car turns beside Mickey, who grabs it's back. They go to the car wash but Mickey the girly mouse, you're so pretty. Pete holds a feather to laugh Mickey, who screams out behind it. Pete held a coin bag while he runs behind his car. His car jumps over a bridge while he is tired to sit on a bridge. As the doves came by, Mickey holds wings and gets an idea.

At the wishing well, Minnie talks to dwarfs about a big spoonful of sugar, you need to wish upon a star, a dream is a wish your heart makes, Goofy boos her, she screamed out the wishing well.

Meanwhile, Mickey flies over the bridge, Pete's car is driving while he saw him with doves. The storm is coming, Mickey comes doves to lay eggs to Pete's car, which crashed in front of a hotel.

Dwarfs and Goofy shouted the coins but Minnie saw Mickey holding a coin bag, which throws coins into the wishing well. The glass slippers wore by Goofy's feet, dwarfs' hairs grow but Dopey's hair grew at Snow's funeral. Minnie made everyone's wish come true and she is Mickey's wish come true. They goodbye to dwarfs and leaving, both lived happily ever after. 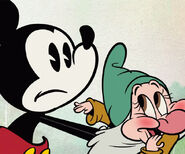 Retrieved from "https://disney.fandom.com/wiki/Wish_Upon_a_Coin?oldid=3959171"
Community content is available under CC-BY-SA unless otherwise noted.