Wishes: A Magical Gathering of Disney Dreams was a fireworks show at the Magic Kingdom theme park of Walt Disney World. The show debuted at the park on October 9, 2003, and was developed by Walt Disney Creative Entertainment, under the direction of VP Parades & Spectaculars, Steve Davison, who was assigned to create a replacement for the 32-year-old Fantasy in the Sky fireworks. Several variations of the show at Walt Disney World include Happy Hallowishes during "Mickey's Not-So-Scary Halloween Party", Holiday Wishes during "Mickey's Very Merry Christmas Party", and Magic, Music and Mayhem during the 2007 event Disney's Pirate and Princess Party. The version at Disneyland Park in Disneyland Paris premiered on July 16, 2005 and had its final show on August 25, 2007. The show at the Magic Kingdom is currently sponsored by Pandora Jewelry. On February 9, 2017, it was announced by the Disney Parks Blog that Wishes would be presented for the last time on May 11, 2017 at the Magic Kingdom Park, to be replaced by Happily Ever After on May 12, 2017.[1]

Wishes at the Magic Kingdom

The show is hosted by Jiminy Cricket and the Blue Fairy, and revolves around the wishes of famous Disney characters - good and bad. The lights on Cinderella Castle change colors throughout the show, reflecting the different stages of Wishes' narrative. During different parts of the show, a "wishing star" firework shoots, cresting approximately 100 feet above the castle’s bright spires. While most of the characters in the show are only heard as part of the show's music track, Wishes also features an appearance from Tinker Bell as she flies from the tallest spire of Cinderella Castle.[2] Wishes includes 683 fireworks, that fire during the 557 cues.

Happy HalloWishes: A Grim Grinning Ghost Spooktacular in the Sky

HalloWishes debuted in 2005 and is performed at the separate-admission event Mickey's Not-So-Scary Halloween Party at the Magic Kingdom in lieu of the regular Wishes show. Taking its name from the theme song for the classic attraction Haunted Mansion, the show features fireworks synchronized to classic Disney Villains themes and other Halloween music.[3]

Holiday Wishes: Celebrate The Spirit of the Season

Holiday Wishes: Celebrate the Spirit of the Season replaces Wishes during Mickey's Very Merry Christmas Party, and during the park's regular operating days near Christmas Day. The show features fireworks performed to remixed classic Christmas songs (including "Spirit of the Season") and an appearance by Tinker Bell.[4]

This fireworks show replaced Wishes at Mickey's Pirate and Princess Party, and features music from the Disney Princess library of animated movies and the Pirates of the Caribbean movie franchise.

During New Year's Eve, the regular Wishes show is shown and then supplemented by a special presentation of Fantasy in the Sky, featuring numerous fireworks and instrumental music from an array of Disney films and attractions. The show is hosted by Mickey Mouse, Minnie Mouse, and Goofy.[5]

In 2010, Walt Disney World replaced Wishes with another fireworks show during a summer entertainment package called "Summer Nightastic!".[6] Disney announced that this would be the Magic, Music, and Mayhem show from Disney's Pirate and Princess Party.[7]

Disneyland Park introduced a fireworks show based on the Magic Kingdom's Wishes pyrotechnics show. The show ran its first year from July 16, 2005 to August 28, 2005, with performances every night at 11:15 p.m. The show ran every summer season from 2005 until 2007 and was replaced in 2008 by The Enchanted Fireworks, and in 2012, Disney Dreams! 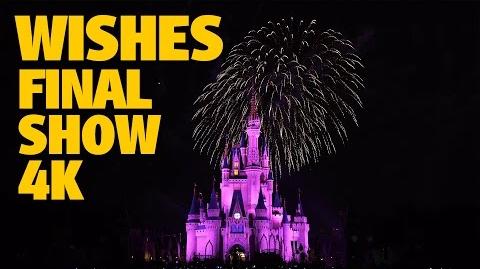 Retrieved from "https://disney.fandom.com/wiki/Wishes:_A_Magical_Gathering_of_Disney_Dreams?oldid=4067250"
Community content is available under CC-BY-SA unless otherwise noted.