Once Upon a Time
"Witch Hunt"

The Wicked Witch of the West flies around the forest on her broomstick.

Back in The Enchanted Forest in the past year, the characters are walking through the forest. Although Regina is still missing Henry, she also starts thinking a lot about the tunnels that run under the castle, which is interrupted by the arrival of a flying monkey that was sent by Zelena, who is planning to attack Regina. Regina uses her magic and turns it into a stuffed monkey, which she hands to Robin’s son Roland. Belle says she’s read about the only land that has winged monkeys, and believes that they might be from a place called Oz; and it is most likely that the one now occupying Regina's castle is none other than the Wicked Witch of the West, as she is the only one known to have such creatures under her employ, but a snarky Regina responds to that comment of who is doing the bidding or orders by saying “I don’t care if the lollypop guild is protecting her,” and she’s going to get in that castle by herself without any help. However, Robin decides he's going to tag along anyway as a way to thank Regina for saving Roland. Robin suspects that Regina still misses someone in her life, even after admitting to him that she does. In the tunnels under the castle, Regina explains she has to put out a fire in the courtyard that powers the spell, only to discover to find the door open when its supposed to be sealed with blood magic. The door leads to a crypt with the coffin of her mother, Cora. As they head to her drawer, Robin becomes suspicious when she take a vial out, then he starts pulling a bow on her.

It turns out that Regina is planning to put a sleeping spell on herself so Henry will find her one day and embrace her again, after lowering the protection spell. Regina then freezes Robin so she can go through with it and does lower the protection spell, but just as she is about to take the spell, she is interrupted by Zelena, who then takes the potion pin from Regina and reveals to Regina that they both have one thing in common besides magic and the fact that Rumplestiltskin trained them is that Cora is their mother and they are half-sisters. Zelena, who is furious that Cora gave Regina everything that she could never have; though a bitter Regina tells Zelena that she got everything CORA wanted, and casting the Dark Curse wasn't all it was cracked up to be: she's now alone without her son. Zelena tells Regina that she plans to take everything she had away from her as revenge. After Zelena flies off in her broom, Regina returns to the crypt and unfreezes Robin, where she tells him that she now has something to live for: someone to destroy.

In Storybrooke, Emma and Hook visits a very pregnant Mary Margaret and David at their home. Since everyone in town can not remember the previous year or how they came back to Storybrooke, Hook tells Mary Margaret he was with them for a short while in the Enchanted Forest the year before, then he left. While he was sailing, a bird brought him a note and the memory potion to inform him about what had happened and he thought Snow sent it. Leroy then arrives and announces that another dwarf is missing and the possibility that Neal might be also missing, so Emma decides they have to get their memories back, by figuring out who took them.

Meanwhile over at Granny's, Ruby brings Henry cocoa with cinnamon when Emma arrives with David and Mary Margaret and passes them off as friends from Phoenix. When Regina sees Henry, she freaks out. Emma then approaches Regina to try to figure out how to find the person who cast the new curse that bought everyone back to Storybrooke. Around the same time, Little John, who, along with the merry men, are unsuccessfully turkey hunting, is snatched by a flying monkey. The disappearance prompts Emma, Hook, and David to investigate, leading them to the city limits where he was last seen. After Emma leaves, Hook and David search the area a finds a mauled Little John in the forest and is taken to the hospital. After they arrived at the hospital, Little John is going into convulsions and is transformed into a flying monkey, and makes an escape into the forest.

Later on at the town hall meeting, Emma and Regina start an argument over who created the new curse (as the entire town is blaming Regina). She denies it and says she would have kept Henry, but Emma doesn't believes her. A furious Regina then disappears. A red-headed women with a green pendant looks suspicious. It is later revealed that back in the Mayor's office that Emma and Regina staged this performance together in an effort to distract the townspeople while they seek out the real source of the curse. It also turns out that Regina is trying to replicate the memory potion to get everyone's year-long memories back, but the chemistry experiment fails, so Emma suggests using an old bail bonds trick to expose the person by announcing that they have a memory potion almost done. Back at the cafe, Mary Margaret is freaking herself out reading a baby book, when a woman approaches and tells her that “cradle cap” goes away. She tells Mary Margaret that hasn’t been in Storybrooke long, saying that she wasn't anyone she’d remember back in The Enchanted Forest. “I was a midwife,” she says, and introduces herself to Mary Margaret as Zelena, who then feels Mary Margaret's stomach, hearing and feeling the unborn child, as if she had something planned in the works for The Charmings. Later that night, Leroy (under the premise that Emma gave him the message that she found Regina) makes the announcement about the potion and Zelena gets up and walks out. Around the same time, Regina and Emma stake out the Mayor's office, where after they bond over Henry, the two get the break they were looking for and as they attempt to capture the person, the caped individual that broke in the office suddenly disappears in a puff of green smoke.

Emma and Regina later return to the apartment, where Emma introduces Henry to Regina, but he doesn't remember her. David and Hook then arrive to tell the women about what happened to Little John. It appears that the missing residents are being turned into flying monkeys, and Regina believes that the only person who could be capable of doing this is The Wicked Witch of The West. Emma’s confused because they’re not in Kansas and is now learning that there is another character living among the residents. Unfortunately, at a farm house located outside Storybrooke, it is revealed that Zelena is actually The Wicked Witch of The West. She then brings a tray of food down into an underground cellar... where it is revealed that she is keeping a prisoner who has gone mad in a cage: Rumplestiltskin.

Regina: "If our simian friend is any indication, then I think we know exactly who's taken up residence in our castle. The Wicked Witch.""
Grumpy: "We talking East or West?"
Snow White: "Does it matter? Neither one sounds good."
Grumpy: "One drop a house on; the other you throw a bucket of water at."
―Regina, Grumpy and Snow

Regina: "The person who escaped our trap disappeared in cloud of green smoke. And now, there are flying monkeys in this town? I think we know exactly who cursed us."
Emma: "(In disbelief) The Wicked Witch of the West? (Regina gives a glare) Seriously? She's real TOO?""
Hook: "Says the daughter of Snow White and Prince Charming"
―Regina, Emma and Hook 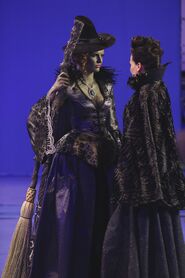 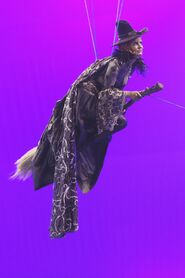