The Wolfy Kids, also known as, Howler, Rip, and Kevin are a trio of werewolf siblings from PJ Masks. They are werewolf children who cause trouble in the city, stealing any vehicles, marking their territory, and also creating dens for themselves.

Howler, Rip, and Kevin, affectionately known as the Wolfy Kids are werewolf half humans who were causing trouble with the aim of taking over the city, the vehicles, and anything else they fancy! They are silly threatening buffoons with comical banter but influenced by the moon they have the traits of wolves, marking their territory, creating dens, combined attacks, and transformation!

Howler's daytime appearance is unknown, but in nighttime, he appears in werewolf form along with Rip and Kevin. He has dark gray spiky hair with two white streaks in the front, sideburns, violet eyes, and claws on his fingers and toes. He also wears a black jacket over a red shirt and blue jeans.

Rip's daytime appearance is unknown. In nighttime, she also appears in werewolf form. Her hair is colored dark magenta with lighter tips. She has magenta eyes and claws on her fingers and toes. She also wears a black jacket over a yellow shirt, gray plaid skirt, and red-and-black striped stockings.

Kevin's daytime appearance is unknown. In nighttime, like Howler and Rip, he also appears in werewolf form. He has cyan eyes but aren't seen because of being covered by his dark purple shaggy hair. He has claws on his fingers and toes, and wears a black-and-teal jacket over a black-and-white striped shirt and dark gray jeans. 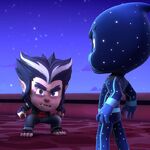 Didn't the fur and the fangs clue you in?

You can see Kevin's eyes