This article is about the Marvel Cinematic Universe character. For characters who share the same name, see Wong (disambiguation).

The character Wong from Marvel Comics

Masters of the Mystic Arts

To protect the innocent from the forces of evil

Beyoncé's "Single Ladies (Put a Ring on It)", tranquility

Quarterstaff, Sling Ring, Wand of Watoomb
Wong is a character in Marvel Comics who appears in the films Doctor Strange, Avengers: Infinity War, and Avengers: Endgame. The Ancient One assigns Wong to become Stephen Strange's teacher, and has helped Strange master his skills and become one of Strange's allies. Wong is an expert magic user and a master martial artist.

Wong was created by Stan Lee and Steve Ditko.

Wong's main development is being very wise, and very serious and possessing a no-nonsense attitude. Little else is known about his character. 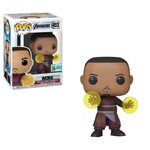 Retrieved from "https://disney.fandom.com/wiki/Wong?oldid=4328245"
Community content is available under CC-BY-SA unless otherwise noted.