In a nightclub staffed and frequented entirely by insects, the stage show has a good girl beetle resisting the advances of a bad-boy spider. Everyone dances, even the snails, as the orchestra plays jazz on their instruments made of flowers. 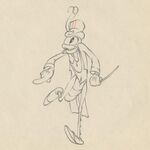 Retrieved from "https://disney.fandom.com/wiki/Woodland_Café?oldid=4468455"
Community content is available under CC-BY-SA unless otherwise noted.