Not to be confused with Woody's Round-Up (attraction).

Woody's Roundup is a fictitious puppet show-within-a-show in the 1999 Disney/Pixar animated film, Toy Story 2. It is sponsored by a cereal brand called Cowboy Crunchies. It is also the show's opening theme song performed by Riders in the Sky.

In the film, the show ran from 1949-1957 and gained a great deal of popularity, especially for its lead character, Sheriff Woody. However, the show was prematurely canceled after the launch of Sputnik 1 that made westerns less popular with kids, as Stinky Pete declared that "once the astronauts went up, children only wanted to play with 'space' toys" and Woody remarks on how he know how that feels (referencing his jealously towards Buzz from the first film). The final episode ended on a cliffhanger at the Grand Canyon that, according to Stinky Pete, was never resolved, yet Woody and company remained pretty sure that it was indeed "Woody's finest hour."

A crucial story element involved Woody discovering his past life as a TV star. Delving back to the early days of black-and-white television, the Pixar team envisioned Woody’s Roundup in the primitive marionette format of the day. To capture that authenticity, the crew enlisted various CGI processes to make the vintage television footage look not only old but also like it had been stored in a garage.

“Look, the thing is, I'm a rare Sheriff Woody doll, and these guys are my Roundup gang.”
―Woody attempts to tell Buzz Lightyear about his Roundup gang

The main cast of the show consisted of:

Most of the gang shared personalities similar to their "real world" counterparts owned by Al, with the biggest exception being Stinky Pete. On Woody's Round Up, he is a joke character: a friendly bumbling fool that normally injures himself from his stupidity. However, Al's Stinky Pete is much wiser and became bitter from being an unsold toy for several years.

The Roundup gang is about to be sold to the Konishi Toy Museum in Tokyo, Japan, but due to Buzz Lightyear's interference as part of his rescue mission, Woody, Jessie, and Bullseye go back to Andy's house while the Prospector ends up with a little girl named Amy.

“Will Woody and Bullseye land to safety? Can they reach Jessie and Stinky Pete in time? Tune in next week for the exciting conclusion: 'Woody's Finest Hour!'”
―Announcer, at the end of the episode

During the next to the last episode, the Prospector and Jessie are trapped in an old abandoned mine. Jessie decides they've got to get out of the mine, but Prospector, wanting some light to find his gold, lights a "candle," which, to Jessie's knowledge, turns out to be a stick of dynamite that will blast them to smithereens. Jessie then calls to the critters with her yodeling and tells them to scurry off and get Sheriff Woody. Meanwhile, Woody has nearly finished building a new schoolhouse with help from Bullseye. Just then, the critters reach Woody, and he learns that Jessie and the Prospector are in danger, awaiting his rescue. Woody mounts Bullseye, telling the horse to "ride like the wind!". As Woody and Bullseye run off, Jessie tries to fan the flames out, then the Prospector tries to smother it out by jumping on it, but burns his butt instead. Woody and Bullseye then jump over the Grand Canyon as the announcer calls for the end of the episode.

Riders in the Sky

"When She Loved Me"

It's time for Woody's Roundup
He's the very best
He's the rootinest, tootinest, cowboy
In the wild, wild west

The show was so popular that a lot of merchandise was made: 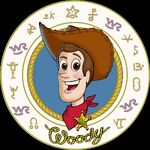 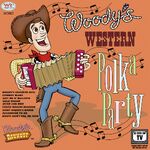 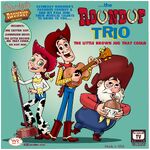 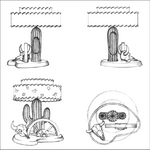