A similarly themed snack cart can be found in Toy Story Land at Hong Kong Disneyland and Walt Disney Studios Park, under the name Jessie's Snack Roundup. It is based mostly around frozen beverages to enjoy. They also offer quick breakfast items here in the morning such as danishes, croissants, granola bars and coffee, also including popular classics like churros, fruit cups and soft serve. 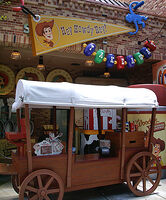 Hey Howdy Hey! Takeaway
Add a photo to this gallery

Retrieved from "https://disney.fandom.com/wiki/Woody%E2%80%99s_Lunch_Box?oldid=4005751"
Community content is available under CC-BY-SA unless otherwise noted.