World Showcase is a celebration of culture, cuisine, architecture and traditions – infused with new magic.

World Showcase can conceptually trace its roots to 1955, when an International Street was proposed for Disneyland as a themed area that would be located behind eastern Main Street USA. An larger International Land based around European locations was also proposed in 1956 for the space between Fantasyland and Tomorrowland, with a boat ride on the "Rivers of Europe" being a centerpiece. However, this would be dropped in favor of the Matterhorn Bobsleds.

An internationally themed shopping and dining district was proposed for Walt's original city concept for EPCOT, existing within the central hub of the city surrounding the central Hotel tower. When the city was dropped after Walt's death, the international shopping and dining district was planned to be repurposed into Walt Disney World's second gate in 1972 and took on the name World Showcase. Plans and models showcased in 1974 for World Showcase placed it on the shores of the Seven Seas Lagoon adjacent to the Transportation and Ticket Center. Two semi-circular structures, similar to the CommuniCore buildings, would house multiple international exhibitions in a neutral space, only varying in size and structure towards the back depending on how much space a country would want to use. Interest in this World Showcase was highly favorable in attracting international sponsors and in late 1975, Disney planned on moving forward with construction with plans to open in 1979. [1]

However, the energy crisis of 1976 and concerns of sinkhole troubles on the proposed site would result in the plans for World Showcase and the Future World Theme Center to be merged into a single park that would be placed further south on the property. By 1977, Epcot began to take on its current shape, with the World Showcase now being built around a lagoon and taking on its format of each pavilion showcasing its respective architecture. When the park opened in 1982, World Showcase featured nine pavilions, with Morocco opening in 1984 and Norway opening in 1988. 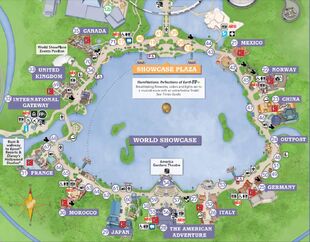 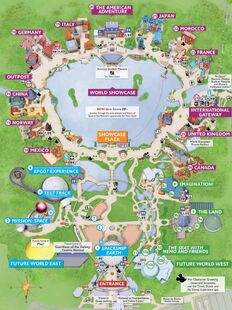 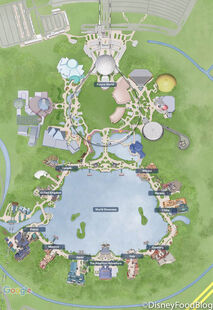 The International Gateway, located between the France and United Kingdom pavilions, serves as an alternate entrance into the park. Guests staying at the resorts near the park and guests coming from Disney's Hollywood Studios can access this gate by walkway or by boat.

Pavilion icon
Add a photo to this gallery

Retrieved from "https://disney.fandom.com/wiki/World_Showcase?oldid=4078511"
Community content is available under CC-BY-SA unless otherwise noted.