Wrecker is a genetically defective clone of Jango Fett and a member of Clone Force 99, also known as the Bad Batch, a squad of clone commandos who each bore genetic mutations.

Wrecker and his Clone Force 99 comrades were conceived on the planet Kamino but due to their genetic flaws, the five clones were placed in Nala Se's secret laboratory outside of Tipoca City and were each given mutations to make them more efficient. When the Clone Wars started, they were quickly sent to the front lines. At some point in his life, Wrecker was injured on the left side of his face.

Wrecker is a total hothead, always ready to blow everything up and rush into the pile. He is also not extremely intelligent, as shown by his lack of strategic planning or understanding of sign language. Wrecker mostly likes to eat and cause explosions all the time. He suffers from vertigo and is also anxious at times.

He also possesses a defiant streak, specifically towards regular clone troopers, dubbing them the "regs" like the rest of his squad. One of Wrecker's quirks is to laugh over nothing. His sense of camaraderie is very high among his brothers-in-arms, respecting Hunter's authority and despite Crosshair's betrayal, Wrecker hoped for a while that he would eventually return although Wrecker would eventually feel some animosity towards him. Like the rest of the Bad Batch, Wrecker despises the Empire.

When he succumbed to Order 66, Wrecker's personality became utterly cold, ruthless, and utterly submissive to the directive implanted in his inhibitor chip, attempting to kill his own friends for violating Order 66. Once his chip was taken away from him, Wrecker became himself again although he bitterly regretted having nearly killed Omega with whom he became particularly close.

Wrecker first appears in meeting with Anakin Skywalker, Captain Rex, and Commander Cody. Wrecker and the rest of Clone Force 99 are assigned to help Anakin and his clone squad retake the Anaxes from the Separatist forces. Their mission unexpectedly leads the Bad Batch to the world of Skako Minor where they infiltrate a Techno Union base and rescue the long believed dead clone, Echo. By resuming the fight on Anaxes, Wrecker, to his great pleasure, blew up the entire fleet of Trench. After the victory, the Bad Batch welcomes Echo as one of their own.

Wrecker first appears meeting with Jedi master Depa Billaba and her Padawan Caleb Dume on the planet Kaller. Wrecker and the rest of the Bad Batch take Caleb with them to take out some Separatist forces as they hear the Clone Wars is coming to end. Suddenly, Supreme Chancellor Palpatine, in reality the sith Darth Sidious, activated Order 66 and Billaba's squad ruthlessly executed him, much to the confusion of the Bad Batch. Even though Wrecker had also heard the order over the radio, he has no idea what it is. While Hunter and Crosshair go looking for Caleb who had fled into the woods after his master's death, Wrecker is tasked by his boss to stop other clone troopers from tracking down the Padawan. One of the clones said their orders came from the Supreme Chancellor himself but Wrecker didn't care, which didn't stop the stubborn clones from getting through anyway.

Afterwards, the Bad Batch returned to Kamino where they began to worry about what had just happened on Kaller before going to see Palpatine's speech about the alleged betrayal of the Jedi, Wrecker making a sarcasm at about Palpatine's disfiguring appearance before the latter proclaimed himself emperor of the now first Galactic Empire. They also meet Omega, a girl serving as Nala Se's medical assistant who has a fascination with each of the divergent clones. Later at the mess, Wrecker intentionally started a fight with the regs following a brief altercation by Omega against a clone who was disrespecting the Bad Batch.

Questioning the usefulness of Clone Force 99 to the Empire, Admiral Tarkin gave the team a test in the training compound, a test that soon turned to live fire, but the five clones managed to win thanks to their ingenuity. Back in their quarters, Wrecker is outraged at having been the target on Tarkin's orders, calling him a snake. Tarkin then comes in person entrusted with a special mission to the Bad Batch to eliminate insurgents on Onderon.

Once there, the team found the insurgents' camp but noticed something was wrong before being captured by a former Onderon soldier who led them to their leader, Saw Gerrera. Gerrera then reveals to them that the insurgents are just poor people refusing to submit to the Empire, then breaks camp, choosing to let the clones go because of their help during the clone wars with advice to adapt and survive or die with the past. Returning to the Marauder, Wrecker witnesses the argument between Hunter and Crosshair whose demeanor has changed since Kaller before Hunter downed a probe droid sent by Tarkin. The five clones then decide to return to Kamino to retrieve Omega following Tech's revelation of the girl's origin as an altered clone like them.

Upon their arrival, the Bad Batch is captured by Tarkin's forces, the latter accusing them of treason to the Empire and has them locked up. In their cell, the team finds Omega and then Crosshair is taken away by the Shock Troopers on Tarkin's orders. Following Tech's directions, Wrecker punctured the air duct hatch, allowing Omega to sneak in and free the remaining four clones. Returning to the Marauder in the hangar where their gear is also kept, the group finds themselves confronted by more Shock Troopers and a Crosshair whose Inhibitor Chip has been amplified, causing him to turn on his brothers. During the skirmish, Wrecker was shot in the shoulder by Crosshair, but the team and Omega managed to board their ship and escape Kamino.

"You can say that again."

Wrecker succumbs to the programming of Order 66. 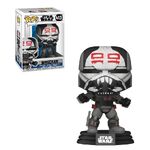 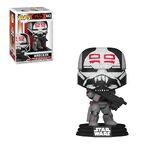