Cyber-junkie made from parts of varying machines

Redeems himself as a hero, rejoins Star Command and becomes a copying machine

Ready to reduce and collate, sir!
XL is an antagonist from Buzz Lightyear of Star Command. He is a flawed prototype of XR that was deactivated for his destructive programming and capabilities that seeks revenge on Star Command after being re-activated by Zurg. He appears in five episodes and eventually reforms, though much of his body is destroyed and rebuilt into a copy machine for the Star Command HQ.

XL was originally created by the LGMs to be the first robotic Space Ranger, but due to his violent and destructive personality, Commander Nebula gave the command for XL to be shut down. This event was what led to Nebula's prejudice against robots and the idea of a robot ranger in particular, though like XR after him the LGMs got permission to build him by sneaking the authorization forms in with their vacation requests. Some time after XR was built, the Evil Emperor Zurg reactivated him, and XL had every intent to take revenge upon Nebula for shutting him down. Stealing parts from various robots and top-secret facilities, he built himself a new body before going to Star Command in search of Nebula.

The Return of XL

Furious after being defeated by XR, XL examined their blueprints and determined that only one component appeared to be different between them: XR possessed an "AFD." Believing the component to be the cause of his defeat, XL captured XR and removed it, installing it in himself. Later, he captured XR again after his "younger brother" took a delivery job in hopes of being able to obtain a replacement. XR ended up bringing XL the final component for his latest evil invention, a dangerously modified version of a Star Command g-force trainer. XL put XR in the machine and set it running, capturing the rest of Team Lightyear when they arrived to rescue their friend. However, the investigations of XR's teammates led to a surprise revelation: AFD stood for Air-Freshening Device, installed by the LGMs due to their dislike of how XR smelled. Realizing that he had not lost a vital component, XR threw several coins out as he was being propelled by the g-force machine, destroying it and damaging XL.

XL later hired Torque to bring him a special component on Tradeworld, which allowed him to upgrade himself with more powerful robotic limbs. Though he initially posed a considerable threat to Team Lightyear, he was defeated yet again when Booster Munchapper, under the influence of Jo-Adian Bunzel Fever, ripped him apart after mistaking him for a Bunzel.

In yet another plot to get revenge on Star Command, XL kidnapped XR and stole his body, disguising his head so that he could impersonate his younger brother and infiltrate Star Command. Succeeding in doing so, he planted a bomb intended to destroy the station, but found himself unable to escape. Mistaken for XR, who due to a misunderstanding was believed to be showing signs of mental fatigue, he was taken to a therapy session. His plan was ultimately thwarted when XR managed to escape using XL's discarded body and then helped Buzz realize that he was the true XR, which led Buzz to return XR to his own body so that he could disable the bomb.

Revenge of the Monsters

Some time later, XL formed an alliance with NOS-4-A2, the two of them infiltrating Star Command and capturing Ty Parsec in order to turn him into Wirewolf. The first stage of their plan complete, the trio traveled to Planet Z, where the succeeded in ousting Zurg and taking over. However, XL began to get an inkling of his lesser role in the alliance, as NOS-4-A2 was quick to claim dominion over Zurg's fortress. XL then fulfilled his primary task, creating a machine that would spread Ty's affliction to other organic beings across the galaxy, providing NOS-4-A2 with a virtually unlimited food supply. Sensing his increasing lack of use to NOS-4-A2 as anything but another meal, XL volunteered to hunt down Buzz and XR, who managed to help him see the error of his ways. Returning to his original purpose, XL helped defeat NOS-4-A2 and undo their evil plans. Subsequently, his head was attached to a copying machine and he joined the Star Command staff. Much to the chagrin of Commander Nebula, both XR and XL begin to pester him over father-sons activities.

XL acts in a very bipolar fashion shifting from friendly to dangerous very rapidly. He also has difficulty understanding literary sayings and metaphors. 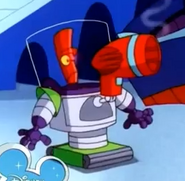 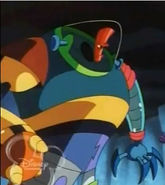 Retrieved from "https://disney.fandom.com/wiki/XL?oldid=3717290"
Community content is available under CC-BY-SA unless otherwise noted.