To rule the world and win Elastigirl's heart.

The Incredibles, Elastigirl refusing his advances

Is last seen gloating in triumph at having destroyed the Incredibles' heroic reputation
Xerek (pronounced "zer-ick") is a villain who was supposed to be the main antagonist in The Incredibles, but was replaced by Syndrome due to the latter's popularity among the producers. However, Xerek would end up retooled for use in the Boom! Studios comic book series as the villain of the ongoing story. Having an uncanny ability to always achieve victory, Xerek became an influential supervillain through his resources and influence. Extending his life through sinister means and technology, Xerek had lived for almost 200 years[1]. He was a boyfriend of Helen before she learned of his activities and she was nearly subjected to becoming a source of energy for another life-extension experiment, which has since lead to Xerek's true age revealing itself. Leading The Unforgivables, a new league of supervillains, Xerek's goals at the moment involve both taking out the family and the rest of the world, having grown tired of his apparent immortality and wanting to take everything down with him.

Cold and calculating, Xerek is apparently known and feared by superheroes and villains alike. Though very little of his personal life is known, Xerek has an unhealthy obsession towards Helen Parr, who had dated Xerek for a time but broke up upon learning of his villainous activities. Despite this, Xerek still pines for Helen and seeks to prove that her current life as the wife of Mr. Incredible is a complete waste compared to being with him.

Xerek fist appears as the main villain of the "Lies and Secrets" story arc by hiring Bomb Voyage to make the Eiffel Tower vanish. After capturing him (with help from Mirage), Elastigirl interrogates the villain and is led to Xerek, who invites her to sit down with him for dinner. Despite his attempts to convince her to come back, Helen refuses to have anything to do with Xerek and he summons armed guards to capture her. However, Mirage arrives with the guards and gets them to capture Xerek instead by promising them better pay. After being sent to prison, Xerek quietly descends into a hidden chamber, where his self-formed organization of villains The Unforgivables wait for him to lead them to victory.

In the final story arc "City of Unforgivables", Xerek enacts a master plan to destroy the reputations of the Incredibles. Using Mezmerella's hypnotic power and amplifying it with a machine powered by the disembodied brain of the deceased superhero Everseer, Xerek is able to command the people of Metroville to hate the Incredibles. He then sends a giant Incredibles-themed robot piloted by The Underminer to attack the city in the heroes' name, further destroying public opinion. Though the robot is destroyed, it does nothing to save the Incredibles' good names and they are forced to walk away in shame, while Xerek is victorious. What comes afterwards remains unknown due to the title's abrupt cancellation. Elements of Xerek's backstory were eventually revealed by writer Landry Q. Walker on his Twitter.

Xerex with Mirage by Lou Romano 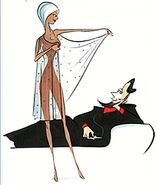 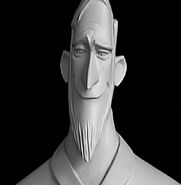 3D rendering of Xerek
Add a photo to this gallery

Retrieved from "https://disney.fandom.com/wiki/Xerek?oldid=3826693"
Community content is available under CC-BY-SA unless otherwise noted.