Her father's cruelty, her mother's death, her brother abandoning her, sexism

Xialing was born between 2003 and 2004. She is the daughter Xu Wenwu and Ying Li, and younger sister of Shang-Chi. She and her family lived in the Ten Rings Headquarters in China for many years happily, until her father's dark past led to the death of her mother. As Wenwu couldn't look at Xialing without being reminded of his late wife, he forbade his daughter from training with her brother and the rest of his men. Xialing instead learned martial arts by observing and copying the movements and techniques until she mastered them herself. 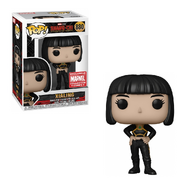