Yama is a minor antagonist in the 2014 Disney animated feature film, Big Hero 6.

Yama is a local crime boss living in the city of San Fransokyo. He has partaken in various illegal acts such as bot-fighting, thievery, illegal money lending and murder. With his gruff and powerful demeanor (coupled by his massive physique) Yama has gained a notorious reputation, and is amongst the most feared members of San Fransokyo's underworld. His base of operation is in a shady district known as "Good Luck Alley", which is heavily guarded by a slew of subordinates under Yama's authority.

In earlier drafts, Yama was intended to be a more important antagonist as a mob boss in San Fransokyo's crime scene. He was the sumo wrestler leader of a gang that worked for Yokai, which consisted of rocket-powered bomber men, and the Fujitas; a group of martial artist roller women in traditional Japanese wear and makeup. Some concept art for Yama depicted him with full body Yakuza style tattoos or donning masks similar to those found in certain Japanese wrestling circles.[1]

In "Food Fight", Yama hires a skilled thief, Momakase, to steal a prototype gravitational disruptor from Alistair Krei. Once she had got it, Momakase decided to keep it for herself and poisons Yama with sushi that made him ill. She then ordered her henchmen to take Yama back to his residence and give him the antidote - eventually.

In "Small Hiro One", Yama catches Hiro and Baymax infiltrating his abandoned warehouse; he fails to recognize Hiro in his superhero outfit. When Hiro demands he return the nickel-titanium alloy he stole, Yama revealed that he used it to create a larger-sized version of Little Yama he dubs Mega Yama. As Hiro evaded Mega Yama's attacks, he incidentally throws Yama off his lift, in which Baymax catches him and holds Yama in bear hug, claiming it would keep him calm, despite his protests to the contrary. As the rest of Big Hero 6 soon showed up, Baymax is forced to release Yama to keep Mega Yama from falling on them. Yama then switched off the warehouse lights to escape with his robot.

Needing to upgrade Mega Yama to best Big Hero 6, Yama blackmails Dr. Trevor Trengrove with a flash drive containing evidence that he stole the thesis of fellow SFIT classmate, Wendy Wower, into tricking SFIT students into creating tech to improve Mega Yama; ironically, those students were Go Go Tomago, Wasabi and Honey Lemon. Additionally, he gave Trengrove specific instructions to keep Hiro away from the workshop under the guise of an age restriction.

Yama and his henchmen later stand guard outside Trengrove's pavilion, where they were approached by Wendy Wower and her Woweroos, offering to show off their volcanoes. Yama soon realized they were a distraction as he spotted Hiro, Baymax and Fred climbing through the upper window. Storming the pavilion and confronting Trengrove in front of Hiro and his friends, Yama demanded his robot. Mega Yama soon burst from behind Trengrove, fully upgraded with all the tech Hiro's friends had created. Yama and his henchmen then hop on Mega Yama and flee. They were soon pursued by Big Hero 6 all the way to the docks, where Go Go snatches Yama's flash drive. Ultimately, Mega Yama was defeated when Big Hero 6 infused the robot with two chem-balls filled with baking soda and vinegar and superheating it to cause it to erupt. Yama was thrown into the water, forcing him to swim away before he could be apprehended. 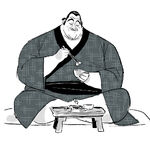 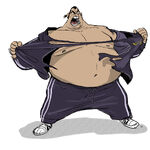