Active
Yama is a minor character from Disney's Gargoyles. He is a gargoyle, a member of Clan Ishimura, and a member of the Redemption Squad. He is voiced by Bruce Locke.

Yama lived a peaceful life among the gargoyles and humans of Ishimura, Japan. In 1996, he betrayed the clan by aligning himself with a human named Taro, a former student of Kai's, who claimed to be creating an theme park about gargoyles to spread Bushido to the children of the world. To that end, Yama planned in secret with Taro to move the clan from Ishimura to the theme park. After this plan began to unfold, Clan Ishimura met the Avalon travelers.

Goliath, Angela, Bronx, Yama, and the remaining gargoyles of Clan Ishimura were taken to the theme park based on gargoyles during the day. Taro told Kai the same story he'd told Yama, but Kai eventually decided not to keep the clan there, despite Yama's protests. Taro responded by hitting Kai with a tranquilizer dart. Yama quickly discovered that he had been deceived, and that Taro planned to introduce the Ishimura clan to the world with a group of reporters. Yama followed the rules of Bushido, and engaged Taro in one-on-one combat. Despite his armor and electrically-charged weapon, Taro lost. Soon, Kai awoke, and the clan went back to Ishimura, where they still live to the present. For disgracing the clan, however, Yama was banished until his last honor could be restored.

Some time thereafter, Yama was recruited into the Redemption Squad by Hunter, Dingo, and Matrix. He was on the helicopter, Redemption, with his squad-mates when they were fired upon by missiles from their target. Matrix, however, protected them by forming a bubble around his squad-mates. Yama destroyed one of his robotic foes, but was attacked by another. Currently his ultimate fate is unknown.

Yama has gray skin, black hair, and two pairs of curved horns. He has a blade on the end of his tail and blade-like spikes on his forearms. His wings are unusual, with no claws on the wrists, and strange markings that look like feathers.

Yama and Sora are mates, although Yama's exile from Ishimura has, for the moment, raised a barrier between them.

Also, it seems likely that he was Kai's second-in-command until his banishment. 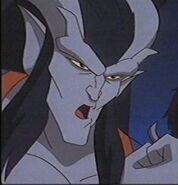