Guardians of the Veil, the Oracle, Meridian

Joan Lin (daughter-in-law)
Hay Lin (granddaughter)
Chen Lin (son)
Eric Lyndon (possible grandson-in-law)
Yan Lin is Hay Lin's grandmother and previous member of Guardian of the Veil. She kept the Heart of Kandrakar safe until it could be passed down to the next generation. She remains a big help to both the Guardians and the Council of Kandrakar. She owns the Silver Dragon where her son, daughter-in-law and granddaughter Hay Lin works at. As opposed to the comic book version, Yan Lin didn't die after the Guardians received their powers. 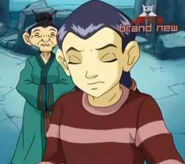