Yellow Beak is a green parrot pirate with a peg-leg. He is dressed in a cloak, a pirate's hat, a red vest and wears a bandanna around his head (colors may vary).

In an adventure with Donald Duck and Huey, Dewey, and Louie, while menaced by Pete (then called Black Pete), they discover buried treasure. This tale was originally planned for a cartoon called "Morgan's Ghost" which was set to feature Mickey Mouse, Donald, Goofy and Pete, but was never produced. It was finally presented by Carl Barks, Jack Hannah and Bob Karp in its familiar "duck form", in Dell's "Donald Duck Finds Pirate Gold". The same pirate tale with Yellow Beak, minus the Ducks, was recycled several times, as in "Four-Color" in "The Seven Dwarfs" tale, illustrated by Tony Strobl, where he looked like José Carioca, again in "Walt Disney's Peter Pan Treasure Chest", in the tale called "Captain Hook and the Buried Treasure", and yet again in an unauthorised non-Disney "Woody Woodpecker" comic, where Yellow Beak's appearance and name remained unchanged. The original version of the tale was recently reprinted in Gladstone's "Donald Duck".

Yellow Beak appears in "The First Adventure!". During the Golden Age of Piracy, Yellow Beak and his crew managed to steal the magical Papyrus of Binding from the Spanish Armada. When using the scroll to escape, he ended up marooning his ship and crew atop a mountain on a Phantom Island in the Bermuda Trapezoid. Further wishes ended up killing his crew by drowning them on dry land when asking for water. Seeking an escape from the "curse" of the papyrus, he wrote his last will and testament on the sheet ending with a wish to be freed from the papyrus's torment and was killed upon finishing the written sentence. When Black Heron arrives to steal the scroll, she uses it to animate Yellow Beak's skeletal remains to battle Scrooge McDuck and his family. 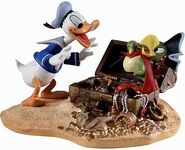