The Yeti, or "Abominable Snowman", is a cryptid said to live in the Himalayas of Central Asia. It is a relative of the North American Bigfoot.

It has appeared in various Disney media, most prominently in the theme parks and is usually depicted as a ferocious territorial beast. The most well known and recurring Disney incarnation of the creature is the one from the Matterhorn Bobsleds attraction at Disneyland, known by the nickname of Harold.

The Abominable Snowman was first introduced to the Matterhorn Bobsleds for it's 1977 refurbishment. According to The Disney Mountains: Imagineering at its Peak, plans existed for the creature to be installed as part of the original 1959 attraction, but budget crunches and scheduling deadlines lead the concept to be shelved. Other historical sources have suggested that the original Snowman figures were repurposed from gorilla figures originally built for the Jungle Cruise. New Snowman figures were installed in 2015 as part of Disneyland's 60th Anniversary, presenting a more expressive creature.

The Yeti built for Expedition Everest was the culmination of extensive research of the Yeti's role in Nepalese and Tibetan culture and primatology to create a believable animal. These influences included the Gigantopithecus often cited as a potential identity for large ape cryptids, as well as the snub-nosed langur, a high-altitude monkey living in the mountains of Sichuan. The animatronic figure built for the attraction's final scene would be one of the largest and most advanced Audio-Animatronics figures ever built for a Disney attraction. Most of the figure's weight would be held up by a slide and boom structure emerging from its back. It was powered by a 3000 psi hydraulic thruster that could be recharged in 20 seconds and the combined thrust of all the figure's linear actuators working together could put out a force equivalent to a jet engine. Because of this, the support base for the figure and it's boom would be kept separate from the structures of the mountain and the ride track. However, problems with this support structure would result in the figure being kept a static "B-Mode" for years. This B-Mode uses strobe lights and fans to convey movement, a back-up plan that has resulted in fans nicknaming the figure "Disco Yeti". Plans to fix the figure have existed for some time, but with Animal Kingdom's low guest capacity, these have been benched for some time.

A yeti appears on the Matterhorn Bobsleds at Disneyland as the main antagonist of the ride. It is sometimes referred to as Harold and it exists as three Audio-Animatronic figures to roar at the riders. One can be seen on both tracks, while the other two can be seen on their respective tracks. In addition to the figures, each track has its own set of glowing red eyes that belong to the monster.

When Harold was first introduced to the attraction in 1978, the marketing campaign focused around the mystery of the monster now lurking in the caves of the Matterhorn Bobsleds. "Fleeting sightings" of the creature put him between seven and nine feet tall, with footprints being measured to be eight inches wide and eighteen inches long, and a thunderous roar being measured 6.9 on the Richter scale. Footprint casts of the Yeti "discovered by Matterhorn mountaineers" were put on display on the queue path around the mountain.

In 2015, to celebrate Disneyland's 60th anniversary, the old yetis were replaced with new ones that move more fluidly and with a less limited range of motion. As the cars go up the initial lift hill, the Yeti also now peers at the guests through thin layers of ice. After roaring a few times, he follows the guests to the peak of the mountain. In both of his appearances as an actual animatronic, he is now hidden behind a few rocks from the waist down.

Though he was initially depicted as attacking riders unprovoked, it was stated that the new incarnation of the yeti is simply trying to protect his environment.

One of the original yeti animatronics makes a cameo in the queue area of Guardians of the Galaxy - Mission: BREAKOUT! as part of the Tivan Collection.

The Yeti is, again, the main antagonist of this rollercoaster at Disney's Animal Kingdom. In the village of Serka Zong, an old train line originally belonging to the Royal Anandapur Tea Company has been re-opened by Himalayan Escapes, a tourism company hoping to use the trains as transport to the Base Camp at Mount Everest. However, the train lines closed in the first place due to incidents in the 1930s where the Yeti attacked the trains moving through his territory in the Forbidden Mountain. The Yeti Museum featured in the attraction's queue also chronicles a failed 1982 expedition to the Forbidden Mountain with blurry photographs of the angry Yeti and the battered remains of the climbers' camp. Despite this evidence and the warnings of the Yeti Museum's curator, Himalayan Escapes does not believe in the Yeti and thinks their rail service is perfectly safe.

After the train sets off, it climbs up the mountain and at the top, it makes a turn to find the tracks ahead have been torn up by the Yeti. Then the train reverses into a cave (via powerful switches). After going a little ways, the riders see the Yeti's shadow as it starts to tear up more tracks. Soon another set of switches activate and the Yeti's shadow disappears as the train goes down an 80 foot drop. After the train makes a turn at the bottom of the drop, it enters a cave, where riders hear the Yeti's roar. After making two loops outside, the train is then lifted back into the mountain for the last time where riders encounter the yeti face to face.

The vocal effects for the Yeti were provided by Fred Tatasciore. Pictures of the Yeti figure can be seen at Shanghai Disneyland's Camp Discovery attraction, taken from a 1930s expedition by the League of Adventurers which were trying to help build trails through the Himalayas.

A female yeti guest stars in the episode "Lost Crown of Genghis Khan", clad in jewels and featuring a very different design from the Yetis that would be used in the video games DuckTales and DuckTales Remastered. She is also a more traditionally designed Yeti in contrast to the more humanoid design from the original Carl Barks storyline that the episode is an adaptation of.

At the beginning she scares away throwing huge snowballs at Genghis Khan and his army while she was threatened to death and finds Genghis Khan's crown lying in the snow, and claims it.

A Yeti appeared in the final episode, "Irreplaceable".

The Yeti makes a brief cameo in the episode "Rabbit Face"; when Yzma and Kronk ride to their secret lab.

A Yeti is seen chasing Heinz Doofenshmirtz in the episode "Phineas and Ferb Christmas Vacation!", and again during the song "Winter Vacation".

The Yeti (in his original Disneyland design) chases Mickey down a swiss mountain in "Yodelberg".

A group of Yeti family is seen in the 35th episode, "Baby Yeti!". They were introduced by Minnie Mouse's nieces Millie and Melody Mouse until learned to work together after a giant snowball sends baby Yeti into the middle of a frozen lake.

Legend of the Three CaballerosEdit

A friendly Yeti named Gary appeared as a concierge in the 12th episode, "Shangri-La-Di-Da" voiced by Dee Bradley Baker, alongside an entire resort staff of yetis.

In this book, the Expedition Everest Yeti is in fact a prison cell for Chernabog who is being rescued by Maleficent whilst Finn Whitman, Amanda and Jessica Lockhart tried to stop them from escaping. Finn attempts to stop Maleficent who is freeing Chernabog. The yeti grabs Finn and prepares to eat him. They escape the cavern when the coster comes through and they hop on.

In this 8-bit computer game, the Yeti is an enemy in Goofy's quest to climb the Matterhorn

The Yeti was one of six characters in the game that would provide daily points for visiting, being located in an ice cave in the Matterhorn.

A male yeti known as Furry Ice Beast serves as a boss of the level Snowflake Mountain as well as a minor villain.

The Yeti and many copies of himself appear as enemies in the Matterhorn Bobsleds mini-game.

According to The Art of Epic Mickey, in early concepts for the game, the Mad Doctor was to have a version of the Disneyland audio animatronic Yeti as a bodyguard. In later concepts, he was supposed to be found at Mickeyjunk Mountain and serve as a battle armor for Oswald the Lucky Rabbit. Despite these two possibilities, the Yeti was eventually scrapped from the game.

The Old 1977 Yeti in Matterhorn Bobsleds at Disneyland

CGI render of the 2015 Matterhorn Yeti

Close-up of the Everest Yeti's face

A fan-produced piece based on Disco Yeti, a fan nickname for Expedition Everest's malfunctioning Yeti figure 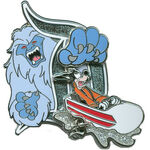 Stitch as the Yeti
Add a photo to this gallery

Yeti as he appeared in the Mickey Mouse animated short "Yodelberg" 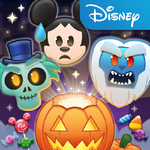 Yeti on the Halloween 2016 app icon

Heinz Doofenshmirtz running from the Yeti 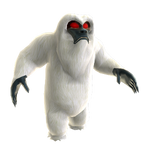 In Legend of the Three Caballeros

Carl Barks's Yeti from The Lost Crown of Genghis Khan

Yeti family in The 7D

Plush
Add a photo to this gallery

Retrieved from "https://disney.fandom.com/wiki/Yeti?oldid=4141258"
Community content is available under CC-BY-SA unless otherwise noted.